Double Draw? Not quite… Two happy winners each with $465,000 reasons to grin!

Trying Mega 6 for a change finally made paydirt for Jamel DePeiza at Mike’s Mini Mart. He freely admits he usually plays Double Draw, but plans to continue playing both games now, especially after his unexpected blessing.

Shirley Best, one of the staff from the popular southern establishment noted this is the second such winning, the other occurring when Mike’s Mini Mart was located at Pilgrim Rd.

DePeiza says this victory will be monumental for his family, as part proceeds will go towards making the residence better for his dad.

In an event that is not too often, he was one of two people pulling $465,000 each, the young Ch Ch man shared the Mega 6 Jackpot with Christopher Campbell, who drew his winning entry from SOL Esso Worthing.

Mr Campbell plans for his prize include clearing his mortgage, remove some debts and split the remainder between investing and setting aside for his daughter’s education. 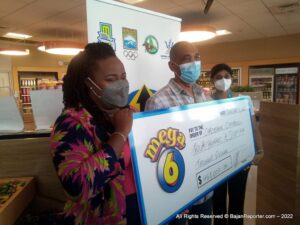 (L to R) Kibibi Cumberbatch of IGT with Christopher Campbell, the other $465,000 winner and Sandy Seereram of SOL Esso Worthing

Sandy Seereram part of the Esso Worthing Management says this occasion of a first time winning from their outlet should be seen as another way patrons can gain from the facility, apart from refueling or enjoying the options from their personalised delicatessen.

The Barbados Lottery also launched a new scratch game of $40,000 Riches yesterday and plan to debut Electric 7s on the 21st of this month, both scratch games have a top payout of $40,000 but you gotta be in it to win it!