Barbados is now perfectly provisioned for a major push to reach its COVID-19 vaccination target.

This morning, Acting Prime Minister Santia Bradshaw and Minister of Health and Wellness, Lt. Col. Jeffrey Bostic, received the second tranche of a gift of vaccines from the United States — 70,200 doses. 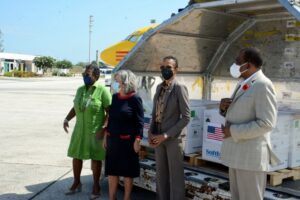 The vaccines, which arrived on a DHL Express cargo flight just before 10 a.m., were part of almost 600, 000 doses shared between Barbados, Antigua and Barbuda, The Bahamas, Belize and Jamaica over the past three days.

After witnessing the arrival of the shipment at the Grantley Adams International Airport today, United States Ambassador to Barbados and the Eastern Caribbean, Linda S. Taglialatela, said:

“In August, the United States donated 70,200 Pfizer vaccines free of charge. And here we are again, donating 70,200 more. No other country in the world has provided Barbados with this level of assistance.

“Vaccines defeated smallpox. Vaccines protect millions of people from measles and polio. Vaccines are the fastest and most sure way to end this COVID-19 pandemic.”

During an online Press conference from Brussels with the local media earlier today, Prime Minister Mia Amor Mottley thanked the United States Government for the gift, noting that the arrival of the shipment today was a direct result of discussions she had last month with United States Vice-President Kamala Harris.

PM Mottley added an increase in the number of fully vaccinated Barbadians would be followed by a relaxation of restrictions, including the current 9 p.m. to 5 a.m. curfew.