Guyana Amazon Warriors confirmed their place in the 2021 Hero Caribbean Premier League (CPL) semi-finals with a second consecutive win over the Jamaica Tallawahs.

Just like the previous encounter between the two sides the Amazon Warriors won the toss and elected to bat first, and although they found themselves in a perilous position at 75/7 – a blistering Romario Shepherd 72 not out ensured they set a target the Tallawahs never looked likely to chase.

In reply the Tallawahs once again succumbed to a heavy defeat as their innings never got going amidst a cluster of regular wickets. Only late hitting from Chris Green prevented them falling to a heavy defeat. 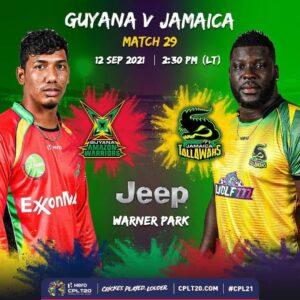 Guyana got their innings off to a slow start as Imad Wasim and Green made early inroads to leave the Amazon Warriors teetering on 36/3.

It was to go from bad to worse when the set Chandrapaul Hemraj holed out in the deep before Shamarh Brooks took a fantastic running catch to remove the dangerous Nicholas Pooran for 9.

Wasim then struck twice in his final over to leave the Amazon Warriors at risk of not making 100.

However, Shepherd’s power hitting counterattack took the Amazon Warriors to a very healthy 142/7 to pile all the pressure back on the Tallawahs.

The Tallawahs reply got off to a poor start when they lost the clean hitting Kennar Lewis and Kirk McKenzie to a double wicket maiden over from Imran Tahir.

With the run rate rising Chadwick Walton offered brief respite with some boundary hitting before Hemraj got him to hole out to in the deep.

Wickets continued to fall as Smith and Shepherd got in on the act and at 42/6 the Tallawahs were left to rely on Carlos Brathwaite and Andre Russell to pull off an unlikely victory.

Some late heroics from Green gave them some hope but they ultimately fell to defeat and exited the tournament.