The Barbados Defence Force recently partnered with the Government of the United Kingdom to continue relief effort to St Vincent and Grenadines in the the aftermath of the La Soufrière volcano eruption. Over one-hundred and thirty-five (135) pallets of humanitarian relief supplies, packed by the BDF Relief Supplies Unit, departed Barbados to St Vincent via the UKs Royal Fleet Auxiliary (RFA) vessel WAVE KNIGHT.

Commanding Officer of the RFA WAVE KNIGHT, Captain Simon Herbert explained that “the WK arrived in the Caribbean region to provide additional resilience as part of the Atlantic Patrol Tasking (North) (APT(N), a permanent Royal Navy presence in the region in support of the Overseas Territories.” 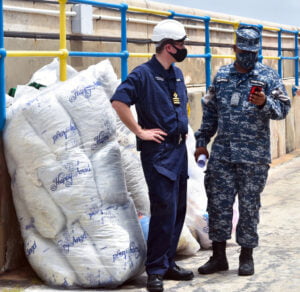 He went to state that the first task of the WK would be to load and transport humanitarian stores from Barbados to St Vincent as part of the ongoing humanitarian support efforts for approximately 14,000 displaced citizens in St Vincent.

The Ship’s Company comprises of Royal Fleet Auxiliary, Royal Nany and Royal Marine personnel. Captain Herbert stated that they are keen to demonstrate the UK’s commitment to the security and stability of the region and alleviate the humanitarian threat caused by the volcano crisis on St Vincent. 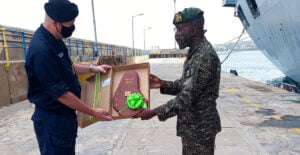 Chief of Staff, Colonel Glyne Grannum expressed his appreciation to the crew of the WAVE KNIGHT for their partnership and commitment to providing relief and security response mechanisms to Barbados and the Region.

He presented the Commanding Officer, Captain Herbert, with a mahogany clock in the shape of Barbados, before the ship slipped the Bridgetown Port.