Everything You Need to Know About Rihanna’s Guitarist: Nuno Bettencourt

R&B singer and superstar Rihanna is widely known as the most successful Barbadian musician in history. But she didn’t get to where she is without the help of her producers and fellow musicians. 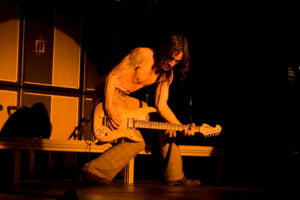 One of these musicians is Nuno Bettencourt, Rihanna’s main tour guitarist. If you haven’t heard of the Portuguese-American rock guitarist, you’re in for a treat.

His partnership with Rihanna began in 2010

Most fans know Bettencourt as the guitarist for seminal ‘80s rock band Extreme. “After Extreme’s early success I got asked all the time to be on pop tours by people like Janet Jackson and others, but I always turned them down,” recalls Bettencourt in a 2013 interview. “After I got off the road in 2008, Rihanna’s music director Tony Bruno called me, saying, ‘I know what you’re going to say, but hear me out.” That was when Rihanna and Bettencourt found out that they dug each other’s music. The man has since repeatedly lent his guitar shredding to Rihanna’s soulful pop hits, giving them a more vibrant rock feel during the superstar’s live tours.

He has a large collection of guitars and pedals

As one of the most prominent guitarists in American ‘80s and ‘90s rock, it’s no surprise that Bettencourt has a sizable collection of guitars and other gear. In fact, there are different Washburn guitars designed to the man’s exact specifications, many of which have ended up in his personal collection. Bettencourt is known to hog more than his fair share of effects stompboxes as well, with a preference for classic Boss pedals. Using these tools to shape his tone, the virtuoso guitarist effortlessly treads the lines between rnb, rock, funk, and pop.

His current work is influenced by Rihanna

Extreme’s latest album was supposed to be released back in 2019. In a 2018 interview, Bettencourt revealed that this album will undoubtedly be shaped by his tours with Rihanna. “I had to ‘put on those different hats’ and I learned a lot by playing those incredible songs with her, and I brought that to what I’m doing now.” Most recently, in the Life In Six Strings podcast with Kylie Olsson, the man revealed that the band’s new album is done. But they’re still waiting for the right time to release it during a live tour.

He has a daughter

BeBe Bettencourt is a successful 25-year-old Australian actress who is also Nuno’s daughter with Suze DeMarchi. While her dad’s known for being the guitarist for Extreme, her mom is the trailblazing vocalist of the highly influential Aussie rock outfit Baby Animals. Despite being born into rock royalty, BeBe chose acting instead.

Today, the pandemic has put a damper on any musician’s plans to tour. This means that we’re unlikely to see Rihanna and Bettencourt sharing the stage anytime soon. Be that as it may, the two have an undeniable chemistry on the tour stage. And if anything, the next normal for live concerts would give the two an awesome opportunity to suddenly reunite and blow their fans’ minds.