The Lions Club of Christ Church West has taken on the mammoth task of addressing paediatric cancers.

This from secretary of the club, Lion Marie-Stella Nicholls whose brainchild it was to take on a project to help raise funds for paediatric cancer patients. She explained this to Raymond Ward, Manager Business Development-Corporate Banking at CIBC FirstCaribbean, when a group from the club stopped by to collect a cheque to help assist with their project.

The money will be used to help children suffering from cancer who may need to go overseas for treatment. The young patients who would be under the supervision of the Barbados Cancer Society would be recommended to the club for support when their parents are unable to meet all of the expenses of overseas travel and medical care there. 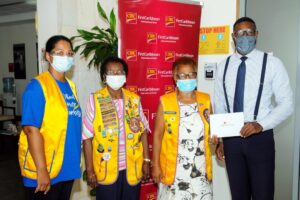 Last year, the club held a Night Cricket Celebrity Match and Fish Fry at the Briar Hall Pavilion to raise some needed funds. President of the Club, Sheila Greaves explained that this event is now likely to become one of their signature projects because of the fellowship and the funds that they were able to generate through the event.

The club was able to attract some well-known names like Pedro Collins and Fidel Edwards who were captains of the two teams. Other players included Dwayne Smith, Ian Bradshaw, Ryan Brathwaite, Eyan Alleyne and Shirley Stuart to name a few. The club charged those who attended the match but also mounted a successful fish fry while other people simply donated to the cause.

Ms. Greaves thanked the bank for the donation and explained that their investigations had shown there were approximately four percent (4%) of children in the world who suffer from some sort of childhood cancer and the club here in Barbados wanted to do their part for children in Barbados affected by this disease.