Those who have been at the front-line of Barbados’ fight against the novel coronavirus (COVID-19) during 2020 will be conferred next year with the Barbados Humanitarian Medal.

Prime Minister, Mia Amor Mottley announced this on Monday as she addressed the nation during this year’s 54th Independence Day Parade and National Awards Ceremony in National Heroes Square, the city. 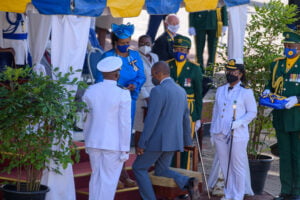 “Our Parliament will have laid before it a special piece of legislation for the conferment of the Barbados Humanitarian Medal for all of our front-line workers in this country regardless of where they fought. We also will amend the National Heroes Act in order to be able to ensure that we can confer more than one gold medal of achievement for extraordinary service in causes that literally have protected this country over the course of the previous year,” it was explained.

She added, “When we pass that legislation it was always contemplated that it would be conferred on one but we must now recognise that this truly has taken a village not simply to build the nation, but also to protect the nation.” READ THE REST OF THE STORY here