CIF denies any connection to Likud Party: why reach out to Region?

“Israel has been slow to admit Ethiopians whose ancestors converted to Christianity, not seeing them as fully Jewish even if they practice Judaism.”

Relations between Tel Aviv and Addis Ababa could be smoother and the path has been made rockier with soon to be former PM Benjamin Netanyahu‘s rather Trumpian immigration edicts towards People Of Colour, be they Ethiopian or African on a whole. 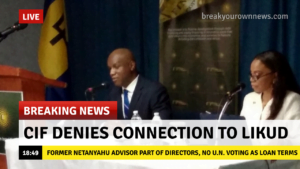 Jews in Ethiopia, known as Beta Israel, were largely cut off from the mainstreams of Judaism for millenniums and their faith evolved in somewhat different form, but Israeli authorities have generally recognized them as Jewish. Since the 1970s, tens of thousands have been admitted from Ethiopia, where they had faced persecution.

Three years ago when Limegrove Cinemas held an inaugural and rather brief Israeli Film Festival, I was rather surprised, then I learned who just presented credentials to the Foreign Minister he was also a Non Resident just like the current title holder…

Ambassador Reda Mansour is a senior Israeli Career diplomat. He has served as the Ambassador of Israel to Brazil, Ambassador to Ecuador (at the age of 35 he was the youngest Ambassador in Israel’s history), Deputy Ambassador in Portugal, Consul General of Israel in Atlanta and Dean of the Atlanta Consular Corps, and Consul in San Francisco.

Again the curiosity why, apart from Onions and Security Cameras, would Israel develop an Intrigue over Barbados? Especially given the tensions between members of Judaism and people from what Trump is said to have called a s***hole country. Then it occurred to me, despite the low regard some held, someone in Tel Aviv realised even the Caribbean can vote at the United Nations, while I was right? I was also incomplete…

The (CIF) Caribbean Israel Finance just launched, on the 17th of this month, a fund facility for Public-Private Partnerships inclusive of Agriculture and Technology-based solutions,again… Given the long-standing history, it appeared rather baffling, a somewhat estranged relationship betwixt Tel Aviv and Ethiopia and other African territories yet now embracing the Caribbean diaspora which is African based for the most part. Was Netanyahu involved?

Netanyahu is not directly involved, yet a member of his Cabinet is a key member to the parent organisation of CIF. Again, what was I missing? Then a possibility finally dropped in my brainpan, not unlike the original Eureka when first screamed millennia ago…

What if Israel not only wants Caribbean votes but is making sure people of African descent are well financed enough not to want to depart their homelands for greener pastures of the Middle East?

This for me had a rather sinister logic, especially as it can be viewed as a Swan Song for Netanyahu as he prepares to cede to Benny Gantz over in Ye Olde Tel Aviv? Who better to smooth relations for a sunny clime than a Director of Foreign Affairs like Ms Riger? Why should Caribbean people accept crumbs from an exiting Government in a bid to maintain its own Aryan-esque standard not so vastly different from a 1936 Berlin?