Despite setbacks in the aviation industry due to the Covid-19 pandemic, GCG Ground Services (Barbados) Ltd has introduced new state of the art equipment into its fleet. 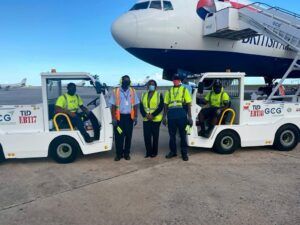 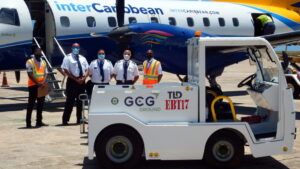 GCG Ops Team Member Ryan Butcher and Station Manager Brian Reid (in safety jackets) flanking members of the interscaribbean flight crew. One of the machines is in the foreground

The electrical tractors are the first electric units, to operate at the Barbados airport and are used to transport the baggage containers from the aircraft to the Arrivals Hall and from the Departure Hall to the aircraft. These tractors which are ‘becoming the new standard in zero emission solutions’ can also be used to push back private jets as they have a load bearing capacity of forty-five hundred (4500) lbs. The AC technology allows progressive acceleration, high speed over long distances and overall excellent towing performances for these machines. 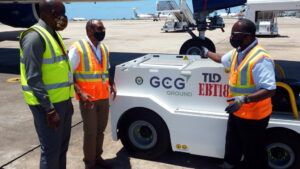 The self-contained Ground Power Unit efficiently produces enough power to start and supply 400 Hz of electrical power to the parked aircraft for the operation of the aircraft’s electrical equipment when the onboard generators are not running. It is designed to emit reduced sound levels to ensure both operator and passenger comfort.

Station Manager at GCG Ground, Brian Reid explained “The investment in this new equipment is a clear demonstration of the company’s commitment, both to a healthier environment and its alignment to the country’s overall objectives, towards a green economy.” He further suggested that as the company replaces its existing fleet over time, the intention is to introduce more electrical units.

CEO of GAIA Inc., Hadley Bourne, on inspecting the equipment, expressed his delight at the introduction of the new electrical and energy efficient units, commending GCG Ground Services for its efforts in this regard. Mr. Bourne stressed that it was the long-term goal of the airport to have as green an operation as possible, and as such, encouraged all stakeholders to consider “green” options.