Game of Thrones Prequel: Trailer (HBO) – House of the Dragon

House of the Dragon is Game of Thrones successor show based on George R.R. Martin’s Fire & Blood, a history of House Targaryen set 300 years before the events in GoT.

Although the show will not air before the year of 2022 HBO did give us a first taste of it with the release of The Dance of Dragons (Histories & Lore). As the featurette is only 20 minutes long, it understandably only gives a concise overview of the most important events which occurred during the Targaryen civil war – though it is a very accurate overview of the events it does cover.

The showrunners of House of the Dragon are Ryan Condal along with battle-tested GoT veteran Miguel Sapochnik.

Set 300 years before the events of Game of Thrones, the series tells the story of a turbulent period for House Targaryen, one that set sibling against sibling and dragon against dragon. The point of contention: who should rule on the Iron Throne, of course.

“If you’d like to know a bit more of what the show will be about… well, I can’t actually spill those beans,” Martin teased in his blog, “but you might want to pick up a copy of two anthologies I did with Gardner Dozois, Dangerous Women, and Rogues and then move on to Archmaester Gyldayn‘s history, Fire & Blood.”

Dangerous Women includes what press materials describe as a “35,000-word novella” by Martin called “The Princess and the Queen, or, the Blacks and the Greens,” which is “about the Dance of the Dragons, the vast civil war that tore Westeros apart nearly two centuries before the events of A Game of Thrones.”

Rogues, meanwhile, includes Martin’s story “The Rogue Prince, or, a King’s Brother,” which chronicles “the early life, adventures, misdeeds, and marriages of Prince Daemon Targaryen,” considered “one of the biggest rogues in the entire history of Ice and Fire.” 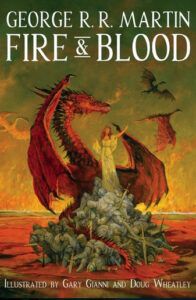 Finally, the novel Fire & Blood, released in November 2018, is the first novel of a two-part history of the Targaryens in Westeros.

“Centuries before the events of A Game of Thrones, House Targaryen — the only family of dragonlords to survive the Doom of Valyria — took up residence on Dragonstone,” according to the book’s description on the author’s site. “Fire & Blood begins their tale with the legendary Aegon the Conqueror, creator of the Iron Throne, and goes on to recount the generations of Targaryens who fought to hold that iconic seat, all the way up to the civil war that nearly tore their dynasty apart.”

In addition to this, few casting calls have been known, I’m speaking of that of Daemon Targaryen, the Rogue Prince, further confirming that the House of the Dragon will be about Dance of the Dragons, the Targaryen civil war.
About George R.R. Martin’s involvement we know only what he stated himself.

George R.R. Martin stated: “I expect to be involved in [House of the Dragons] to some extent…and, who knows, if things work out, I may even be able to script a few episodes, as I did for the first four seasons of GAME OF THRONES. But… let me make this perfectly clear… I am not taking on any scripts until I have finished and delivered WINDS OF WINTER. Winter is still coming, and WINDS remains my priority, as much as I’d love to write an episode of HOUSE.”

Enjoy this video giving you the first taste of what you can expect to see in the House of the Dragon.