SYMMONDS SAYS SO FAR SO GOOD AS COMMERCIAL FLIGHT RETURNS

The Grantley Adams International Airport (GAIA) officially reopened to commercial air traffic on Sunday with the arrival of Air Canada Flight 966 from Toronto at approximately 2:20 that afternoon. 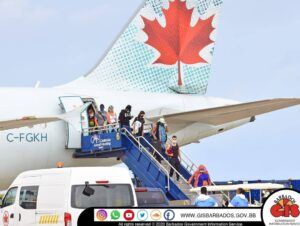 On landing, the 132 passengers disembarked in batches and were greeted by the melodious sounds of the Royal Barbados Police Force Band. Among one of the first arriving passengers was Canadian High Commissioner to Barbados, Marie Legault. 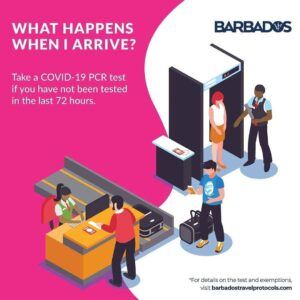 In addition to numerous sanitisation stations and increased signage related to the new arrivals process, there were strict COVID-19 protocols in place at the airport. Physical distancing markers were affixed to seats and floors. Airport employees were all outfitted in personal protective equipment, such as face shields and masks.

Port health officials verified the negative PCR COVID-19 tests of passengers, and directed those who did not have a PCR test, or who didn’t meet the verification requirements, to the testing facility located at Gate 14. Persons travelling to Barbados are encouraged to take a PCR test 72 hours prior to their departure.

Gate 14, which previously facilitated sea-to-air transfer passengers, has been transformed into a new arrivals hall, equipped with a thermal imaging scanner, an immigration area, a testing bay, seating and a luggage collection point.

Minister Symmonds said he was “relatively satisfied” that the entire process went as planned, but disclosed a few amendments may be made going forward.

“The vast majority of people did come with a negative test. As they went down the corridor…, the health officials validate your test and once they are satisfied you go through to arrivals,” he said.

The Tourism Minister disclosed that approximately 15 to 20 passengers were processed in the testing facility, and would await their results at an approved facility.