Two women, aged 57 and 56, are the latest COVID-19 positive patients in Barbados, bringing the number of confirmed cases to 92.

The 56-year-old is the fifth member of a Bridgetown church to test positive. 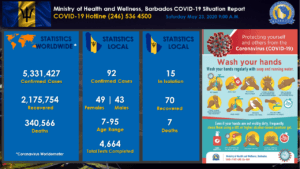 The Ministry of Health and Wellness said they completed the testing of 30 people whose names were supplied by the church as members. All of the others tested negative. It revealed that while the church had originally supplied a list of 28 members, that list was recently upgraded to add two others.

Acting Chief Medical Officer, Dr Anton Best, said how aggressive contact tracing was ongoing to locate persons with whom the confirmed cases were in close contact.

The two positive results were among 123 returned by the Best-dos Santos Public Health Laboratory yesterday.

Meanwhile, no one will be released from isolation, so the number of people isolated now stands at 15. Recoveries remain at 70, and seven fatalities were recorded.

The laboratory has completed 4,664 tests.