Matthew Wright has been a steady fixture on the triathlon world stage this season. Jumping 15 places to 140th in the World Rankings after recently competing at the 2019 Aqaba ASTC Triathlon Asian Cup in Jordan last weekend; Matthew is on a mission to be in the top 70 by May next year to place himself in contention for the Tokyo 2020 Olympics.

In a field of over 40 competitors from all over the world, Matthew managed to secure a spot in the top 10 at his 9th race for the year. The tightly contested battle was won by Felix Duchampt from Romania in a time of 1 hour and 49 minutes followed by Valentin Wernz of Germany and Ognjen Stojanovic of Serbia in 1:50:14 and 1:50:39 respectively for second and third. 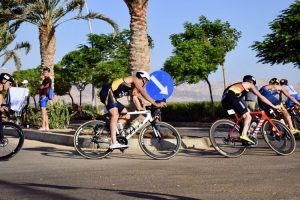 The true fight for position in the hot desert climate came in the 1 hour and 51-minute mark, when 6 triathletes were separated by seconds to decide positions 6 through 11 where Matthew finished in a time of 1:51:44 for 10th place.

After the race Matthew mentioned, “smart positioning on the bike was crucial in the extremely windy conditions…coming 10th wasn’t ideal but I took a risk with a breakaway on the bike that didn’t pay off and I paid for it on the 10km run.”

Prior to the above, Matthew made his first podium finish of the season at the British Championships. Now he is back home with aspirations of not only making the podium, but also winning the 2019 Barbados National Triathlon title. Set to take place on Sunday October 13th along Brandon’s Beach and the Mighty Grynner Highway (formerlly known as Spring Garden Highway).

Matthew also stated, “I am really excited to participate in Nationals. I have never won the National title. I won the sprint race a few times when I was younger, but only raced 1 Olympic distance Nationals, which is the official National title, when I was 17. That was my 1st ever Olympic Distance race, and I came 2nd behind Rio Olympian Jason Wilson… having the chance to put National Champion onto my CV is added motivation!”

After nationals, Matthew will close out the 2019 season with 3 more races, starting with the Lima World Cup on November 3rd, which he expects to do well in, as it is the same course he successfully raced for the Pan American Games in July. After which he will head to Santo Domingo for the World Cup and end with the Formosa CAMTRI Cup in Argentina.

Come out on October 13th, 2019 to see Matthew, CARIFTA triathletes and other triathletes from around the region, USA and the UK compete in the 2019 Barbados National Triathlon. Championships. Race starts at 6:00 a.m. along the Mighty Grynner Highway and Brandon’s Beach.

BFIT is the governing federation for triathlon and triathletes in Barbados. BFIT sanctions and organizes multi-sport events, which include Triathlon, Duathlon and Aquathlon. For more information on future events and the sport of triathlon contact triathlonbarbados@gmail.com.