Most local banking apps and the City of Bridgetown Credit Union have facilities where users can clear their electricity, water and other monthly duties via the mobile rather than stand in line for 20 minutes or more waiting to clear those obligations.

The mMoney app once approved, would become the latest such device to offer an ease to the consumer in pursuit of more productive or leisure time… 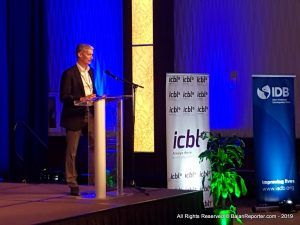 Senator Adams noted after much testing, the mMoney app in addition to topping up u[ cellphones and paying for groceries at Carlton A1 and for petrol at SOL Worthing will have another test ground at Massy supermarket in Coverley and eventually through Massy subsidiary’s Illuminat’s SurePay for utility clearances.

The conference, now in its third year, seeks to educate the public, regional governments and central banks on the transformational impact and benefits of employing Blockchain Technology to enhance the financial system.