BFIT welcomed Labour Minister & the MP for St. Peter – Colin Jordan, who attended among many other supporters on a hot day for the second annual Triathlon and Breakfast event at the picturesque location.

The event commenced at 6:30 a.m. with the Sprint Triathlon and Sprint Relay – a swim course of 750m, followed by a challenging and technical bike course of 20km and a run course of 5km – which featured the ‘hill‘ from Six Men’s Bay via Colleton to the roundabout at St. Lucy’s Church and back down the same, not once but twice.

In the Sprint Relay, “Bright Ones” a team which comprised of Alison Pile, Thomas Wingrove and Paul Marshall captured first with a four minute lead (1 hr 12 minutes) over second-place finishers “Firecrackers” (Mandy Garcia, Sedwin Jones and Michelle Bell) who finished in 1 hr and 16 minutes.

In the newly introduced “Try-a-tri” event (400m swim, 10km bike and 2.5km run) a great race for youth and beginners, the Barbados Youth CAFITA squad competed and represented well capturing the top 10 spots in the field which welcomed 16 competitors. Christopher Pollard age 15, seized the top spot in 38 minutes, followed by Luke McIntyre and Fynn Armstrong, both 11 in 41 and 42 minutes respectively. Kayla Renwick topped the females (7th overall) with a time of 45 minutes. 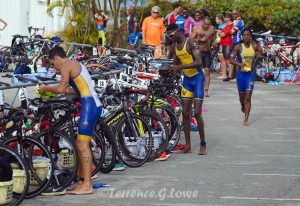 After the event, many of the participants relaxed and enjoyed a sumptuous buffet breakfast enjoyed at Pier One restaurant, one of Barbados’ premium waterfront dining destination.