The Salvation Army is giving praise to both individual and corporate Barbados as the goal for the Christmas Kettles were reached and exceeded. 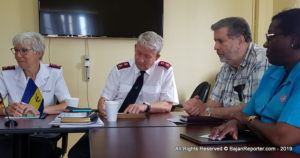 This was confirmed in a special press debriefing at their Reed St Headquarters in the City.

Mrs Sherma Evelyn from the Army’s clerical department made this revelation while explaining how potential donors can make a special contribution which can be considered tax deductible; –

Mrs Evelyn gave a breakdown of the majority of corporate citizenry who helped the Salvation Army reach and surpass their goal of 650-thousand dollars; –

Paul Bernstein, is the Chair of the department which tabulates all of the donations, he said how individual Barbadians made it possible for theArmy to increase their daily meal output for those without jobs or a place to stay; –