The Department of Commerce and Consumer Affairs (DCCA) has advised that while a voluntary recall was recently issued by Hanschell Inniss on Kellogg’s Honey Smacks cereal, this as the United States Food and Drug Administration (FDA) expanded that recall to include ALL Kellogg’s Honey Smacks.

Deputy Director (Ag.) of the DCCA, Margaret Campbell-Leslie, said the department, which is charged with the protection of consumers, is therefore advising all individuals not to eat and to discard any Kellogg’s Honey Smacks cereal. This is regardless of size or “best if used by” dates. 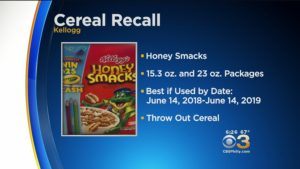 According to website information, the FDA, along with the Centres for Disease Control and Protection (CDC) and state and local partners, is currently investigating an outbreak of multi-state Salmonella Mbandaka infections in the US, that may be linked to this sweetened puffed wheat cereal.

The recall notice given by the FDA takes into account all Kellogg’s Honey Smack products that are on the market within the cereal’s estimated one year shelf-life. However, the FDA further advises that Honey Smacks products with earlier dates could also potentially be contaminated.

The recall comes against a backdrop so far, a CDC report states that 73 people in 31 US states have become ill and 24 have been hospitalised. To date, there have been no deaths.

Most persons infected with Salmonella develop diarrhoea, fever, and abdominal cramps. While most infections usually last from four to seven days and most people recover without treatment, some may develop diarrhea so severe that they may require hospitalisation.

The Consumer Affairs Department, says the Deputy Director, is expected to keep the public up-to-date on the recall.