“Berries for the Boys” by Grenville Phillips II

This Government needs tax revenue in order that we may all benefit from Government managed health, education, road maintenance, police, fire, and other services. Therefore, we should all pay our taxes. If we do not pay our taxes, then the Government must unfairly burden another group with additional taxes to make up the difference – this group is normally the middle-class. The alternative is to restrict the provision of these services.

Those who refuse to pay taxes compete unfairly in Barbados’ economy, since they can offer their products at a lower cost than their tax-paying competitors. In an attempt to reduce the unfairness in the system, the Government has insisted that tax-clearance certificates, which prove that all taxes have been paid, must be obtained in order to participate in certain sectors of Barbados’ economy.

The Minister of Finance must be commended for this attempt to ensure fairness in Barbados’ economy, because a fair economy facilitates economic growth, which can help to solve our now dire economic problems. Since we can all benefit from a growing economy, I hope that the Ministry of Finance will seriously consider this improvement to his initiative.

Those who owe the Government taxes fall into one of two categories: those who have the money to pay, and those who do not. The tax-clearance requirement is an appropriate response to those who have the capacity to pay, but choose not to. However, this requirement can harm the national economy by closing highly competent and competitive businesses, who do not have the capacity to pay. The obvious question is: if they are so competent and competitive, why can’t they pay their taxes? Let me try to explain. 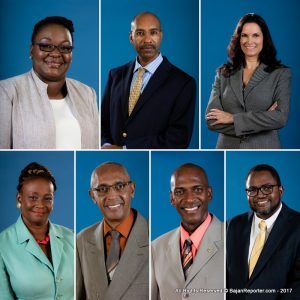 Grenville Phillips II is the founder of Solutions Barbados and can be reached at NextParty246@gmail.com

Barbados passed that tipping point decades ago. The likely time was identified by Moody’s 2009 downgrade report as 20 years ago. To be charitable, politicians may be oblivious to the damage that distributing these ‘berries’ has on the national economy. Ironically, the damage that they are inflicting on the national economy today, will result in a future Government being unable to pay their lucrative lifetime pensions later.

Those who are given no-bid Government contracts do not need to attend to their professional development, unlike their competitors who must compete in the market-place. Those shielded from competition tend to become the least competent, and the least likely to successfully compete in Barbados’ economy. The damage to Barbados’ economy is measurable when these less competent companies provide substandard products (goods and services), which require unnecessarily frequent maintenance and premature replacement.

When the replacement work is given to another politically favoured company that is protected from competition, then the public may pay many times over for the same product. Taxpayers generally hope to be unburdened from this inefficient wastage when the political party is finally voted out of Government. However, such hopes are normally dashed when the incoming political party interprets their win as simply their turn at the trough. Be assured that a Solutions Barbados administration will definitely not continue this practise.

When Government decides who wins in Barbados’ economy, it automatically decides who loses. By repeatedly choosing the most incompetent companies as winners, and the most competent as losers, the Government does significant damage to the national economy that can take over a decade to repair. For those entrusted to carefully manage our national economy, to treat it with such damaging recklessness is highly irresponsible.

The Government needs tax revenues, but it has corrupted Barbados’ economy to the point where it has been structurally damaged for the past 20 years. Fortunately, the Government can easily make things right. First, it can demand taxes from all of those whom it declared to be winners in Barbados’ economy. Second, it can abolish the practice of handing no-bid contracts (or berries) to political supporters. Third, it can declare a general forgiveness of all taxes owed to Government for those it has automatically declared to be losers. Only then can the Minister of Finance reasonably demand tax-clearance certificates from everyone.