HBO GO ARRIVES TO THE HOME’S “BIG SCREEN” WITH CHROMECAST

HBO revealed their digital entertainment platform HBO GO is now available with Chromecast, Google’s device that brings online content to the TV. With Chromecast, HBO subscribers will now be able to transmit all the premium content available on HBO GO, to their TV screens. 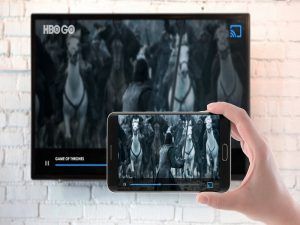 With Chromecast, HBO fans will be able to enjoy HBO GO on their flat screen TVs

Chromecast is a multimedia streaming device that connects to the HDMI port on a TV. With over 30 million units sold[1], Chromecast has become the most popular streaming device in the world today[2]. Right now, with HBO GO on mobile devices and Chromecast connected to the TV, users will be able to stream the platform’s content directly to their flat screen TVs while selecting content, adding subtitles and choosing audio language from the app.

“With the addition of Chromecast, we are providing more flexibility to HBO subscribers so that they can enjoy our content anytime, anywhere“, said Francisco Smith, EVP of Distribution and Content Development of HBO Latin America. “With this launch, the user will be able to enjoy HBO GO on their principal screen at home and live the immersive experience of our premium content from their TVs.”

For 15 consecutive years, HBO’s series, films, specials and documentaries have been awarded more Emmys® than any other programmer. HBO GO offers the best of HBO’s content through over 2,500 exclusive titles with no commercial breaks, including 70% of Hollywood’s blockbuster movies, available to viewers in Latin America and the Caribbean first on HBO. The platform also includes each of the series from the 15 years of HBO’s original productions in Latin America — such as Epitafios, O Negocio and Sr. Ávila — and offers a selection of the best international and independent films from the MAX channel.

HBO GO has a graphic interface that gives the consumer quick and easy access to content that can only be seen on HBO. It also offers a live streaming of HBO’s linear channel anytime, anywhere, from any device. The platform includes functions such as parental control and multi-language selection: the option to choose the platform’s audio and subtitle language (Spanish, English or Portuguese).

HBO GO can be accessed through any mobile device with the iOS (iPad, iPhone, iPod Touch) or Android (OS 4.0+) operating system, and online at www.hbogoca.com. The platform is available free of charge to subscribers of the HBO/MAX premium package and as an “a la carte” service through participating local operators.