BEES will be swarming this weekend and the next…

Tthe Barbados Labour Party (BLP) family will be out in their numbers as they hold their annual Founders’ Day service this Sunday 23rd April 2017 at 11 a.m. in Queen’s Park Steel Shed, The City.

And next Friday, National Heroes Day 28th April 2017, they will host their annual picnic and family fun day at the Ermie Bourne Highway, St. Andrew from 11 a.m. 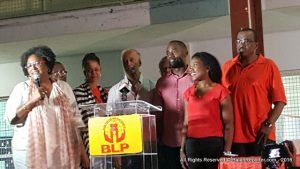 This year’s Founders’ Day service will be celebrated with a difference in that several candidates and party officials will participate in various ways.

After the service, which will be officiated by Reverend Dr. Beverley Lashley, Mottley, Payne, Walcott, St. Joseph MP Dale Marshall and St Thomas MP Cynthia Forde will walk-over to St. Michael’s Cathedral to lay wreaths at the gravesite of the BLP’s founding father and National Hero, the Right Excellent Sir Grantley Adams. This takes place at 12:45 p.m.

Commemoration of the 69th anniversary of the BLP’s founding continues afterwards with the annual luncheon at their Grantley Adams House headquarters on Roebuck Street.

On Friday, party supporters are expected to paint the Ermie Bourne Highway, St Andrew red when they converge there for what is regarded as the largest annual picnic in Barbados.

Now in its tenth year, the picnic is held on the birthdate of the BLP’s founding father. It will feature several family activities and popular DJs.
Transportation to the event will leave each of the 30 constituencies from around 9:30 a.m.