Arrivals are up, visitor spend is up, property investment among the accommodation sector is way up and new experiences are being created for visitors to Barbados.

This good news was revealed during a mid-year media update on the sector’s performance by the heads of three of the industry’s primary agencies.

He also revealed that, “All months, with the exception of April, recorded increases in arrivals with January at 62,485 and February at 61,015, emerging as the peak months with growth of 11.3 percent and 5.5 percent, respectively. There was also significant growth during the month of May as visitor arrivals grew by 9.6 percent to reach 44,935.”

According to Griffith, “this represents a strong growth trajectory for the destination“, which experienced a record year in arrivals in 2015 when 591,872 travellers visited Barbados.

Griffith also read an updated statement on behalf of the Caribbean Tourism Organization (CTO) on the island’s visitor expenditure. According to the CTO, Q1 2015 visitor expenditure was adjusted upwards from US$ 280 million to US$ 288 million. This means that the island did even better than previously assessed in 2015, though it revises the year-on-year increase for the first quarter of 2016 to 16.6 percent rather than the 20 percent as previously reported.

“By all standards, this is still a strong, positive indication that our visitor spend is trending in the right direction and we remain committed to working with our partners toward sustaining this desired momentum,” commented Griffith.

In a comprehensive update on the island’s tourism capital investment projects, Barbados Tourism Investment Inc. (BTII) CEO, Stuart Layne, confirmed that Barbados was well on its way to realizing US $1 billion in hotel investments during the next four years. Current projects include Sandals Barbados’ Phase II, which will result in 222 additional rooms; and Sam Lord’s Castle, which will feature 450 Wyndham-branded rooms. Additionally, the 232-key Hyatt Centric is expected to break ground soon in historic Bridgetown. According to Layne, this is the beginning of a long positive growth trajectory for the island. 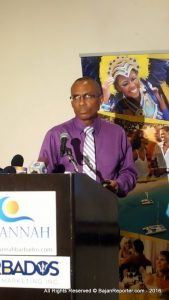 “The combination of new services and recognizable hotel chains from the USA augurs well for us as we shift our dependence from any single source market. This is a wise strategy when we consider, for example the UK’s recent Brexit vote. Our commitment at the BTII is to ensure these projects convey an authentic Barbadian experience“.

In her presentation, Dr. Kerry Hall, CEO of the Barbados Tourism Product Authority (BTPA), challenged industry players to be uncompromisingly Bajan in the way the island’s tourism sector is developed, promoted and delivered to visitors.

“Our scientific research has proven that visitors want to get into the DNA of our destination. We have therefore embarked on a number of new tourism experiences that provide these opportunities for cultural immersion for our visitors, including Speightstown Sizzlin’, Breezin’ Tours off the beaten path, and Holetown Heritage Walks to name a few. We’re also pursuing new niches, namely genealogy tourism, voluntourism and astro-tourism to attract a new type of visitor to our shores.” 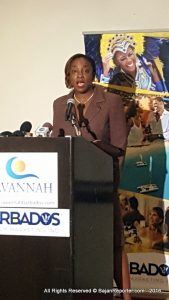 Simultaneous with the creation of these new experiences, the BTPA is moving to strengthen industry regulations, particularly for newer forms of accommodation and restaurants. The BTPA’s mandate also extends to a number of national awareness programmes, including the Clean Bim anti-littering campaign and ‘I am Tourism‘, which will highlight the important role of non-traditional industry workers.

“We are all in this together and it is very rewarding to know that all of our major indicators are performing well and that much-needed confidence is returning to our industry, which will benefit visitors, as well as the people of Barbados“. remarked CEO Griffith.