An amicable meeting at the Education Ministry is yet to establish if the row over a 14-year-old pupil’s refusal to pick up garbage at Springer Memorial more than two months ago, means she stays there or heads for Ellerslie Secondary.

Nevertheless, a lawyer for the pupil’s mother Elecia Weekes claimed progress in negotiations with Minister of Education Ronald Jones, although there was no decision on when the girl would return to the classroom. 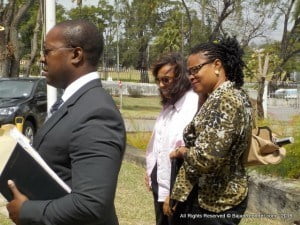 Weekes, her lawyer Steve Straughn and child advocate Shelley Ross emerged from the closed-door meeting about two hours after the scheduled 10 a.m. start to reveal little to the waiting media.

A usually outspoken Weekes was tightlipped, but Straughn said in a brief statement that the parties had agreed to work in the child’s best interest and were putting structures in place to ensure her return to school.

Jones called the meeting after a wave of criticism over his inaction on a dispute that began over two months ago.

The student was suspended for refusing to pick up a wrapper after she was ordered to do so by a teacher and the principal.

At the end of her suspension she was kept away from classes because of her continued refusal to pick up litter, her mother claimed.

The already contentious situation took a turn for the worse when police were called in to Springer Memorial by Weekes on Monday after her daughter was ordered off the compound by Principal Pauline Benjamin.

The release said the principals of both Ellerslie and Springer had been informed of the transfer, adding that the fourth form student’s records showed that Ellerslie was one of her options in the Barbados Secondary Schools’ Entrance Examination.

Weekes had previously revealed that she had rejected the proposed transfer and insisted on being given a say on which school her daughter was transferred to.