The UK Government’s GREAT Britain campaign, Disney and Lucasfilm have announced a unique collaboration that celebrates the British inspiration, creativity and innovation involved in the Star Wars saga ahead of the December 17th UK cinema release of the highly anticipated Star Wars: The Force Awakens.

A series of videos featuring British icons such as Sir Richard Branson, Jamie Oliver and Jessica Ennis-Hill will profile the incredible British talent that has made Star Wars the global phenomenon it is today, celebrating almost 40 years of GREAT British filmmaking. Each video tells the story of the nation’s contribution to Star Wars through pillars such as innovation (Sir Richard Branson), inspiration to future generations (Jessica Ennis-Hill) and the legacy behind the films (Jamie Oliver). 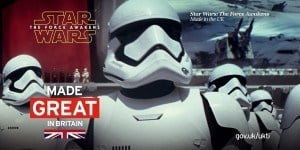 Almost 40 years ago the incredible story between Great Britain and Star Wars began with the production of Star Wars: A New Hope at Elstree Studios.

The imagination, inspiration and innovation of the filmmakers included the original lightsabre design by British set decorator Roger Christian – who fashioned it from spare camera parts and collected junk, Academy Award®-winning costume designs from British-born John Mollo – the man who brought Darth Vader’s iconic look to life; and the key roles of the London Symphony Orchestra and Abbey Road – the birthplace of one the most iconic themes in the galaxy.

The story continues with Star Wars: The Force Awakens which was filmed in the UK using some truly GREAT British talent in both the production team and amongst the on screen stars including the droid-building skills of two British fans, Oliver Steeples and Lee Towersey, who were recruited to bring R2-D2 to life plus British actors Daisy Ridley, John Boyega and Gwendoline Christie who play Rey, Finn and Captain Phasma in the new film.

In addition The Industry Trust for IP Awareness, the UK copyright education body, is launching a Star Wars: Made GREAT in Britain 55″ trailer as part of its Moments Worth Paying For campaign.

Lucasfilm President and Star Wars: The Force Awakens Producer, Kathleen Kennedy said: “Britain is the home of Star Wars. Returning to the UK and setting up at Pinewood felt like a kind of homecoming, especially with the generations of crew members who go back to the early days of the Star Wars saga. It’s been wonderful to see this new generation drafting off that classic sensibility while working on these new films.” 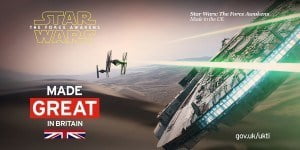 In 2013 the UK’s Chancellor of the Exchequer, George Osborne announced the production of Star Wars: The Force Awakens in the UK. Speaking ahead of the launch of the new films, Chancellor George Osborne said: “Nearly 40 years ago British creativity brought Star Wars to the big screen and I’m delighted that British talent in front and behind the camera is set to captivate cinema audiences around the world again.

“Just as this film represents another chapter in the extraordinary star wars story – so it also represents a new chapter in British film making. I was determined that the UK would be the home of this great production, and together we fought hard to bring it here. Two years later we see the results: more jobs, skills and investment. May the force be with us.”