A number of local and regional corporate entities and their staff will be joining employees of CIBC FirstCaribbean International Bank and the Barbados Cancer Society (BCS) Breast Screening Programme in the annual Walk for Cure due to take place on Sunday 4th October. 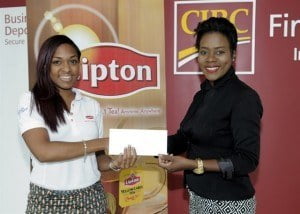 Many of these companies are business partners of the Bank and have pledged sums of money which will eventually be handed over to the Breast Screening unit of the BCS as Barbados joins hundreds of other CIBC FirstCaribbean employees from around the region this weekend as they walk and run to create awareness of this disease.

For the first time, the 5K walk/run will start off from the CIBC FirstCaribbean Headquarters at Warrens and travel south along the highway to the Clyde Walcott (or Hothersal) roundabout and end in the car park by the Dome Mall where the newest branch of the Bank is located. 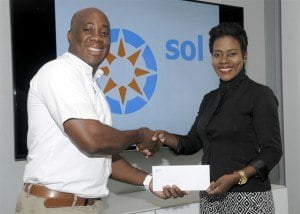 SOL’s General Manager Ezra Prescod hands over the cheque to Elisha Stuart as he gets final details on the walk from her.

The 10 K run will start the same place and go to the Norman Niles (or Harris Paints) Roundabout and return to the Dome Mall car park.

Last year, the staff at CIBC FirstCaribbean in Barbados handed over Bds$72,000 to the Breast Screening Unit of the Barbados Cancer Society and it looks like they will have an even heavier cheque this year with over Bds$68, 000 raised so far and with a month of fundraising left to go.

Regionally the combined total raised by all the territories last year wasUSD$200, 000 and again all the units in the 17 countries in which CIBC FirstCaribbean operates have been working diligently on raising even more funds to assist with cancer awareness and research, joining their colleagues in CIBC Canada as they raise money and awareness for a common cause against cancer. They have raised over USD$300, 000 and climbing so far this year.

In 2014, over 3,000 CIBC FirstCaribbean employees, friends and family in the Caribbean joined more than 13,000 employees, family and friends of Team CIBC in 60 different Run sites across Canada as theytook part in Canada’s CIBCRun for the Cure, uniting employees of the CIBC group of companies in the common cause.