TWO lucky dads, who won $5,000 each as the second and third weekly winners of the Stay Up with Digicel Summer Promotion, will use their winnings to purchase back-to-school supplies for their children, among other items.

Kareem Surage and Charles Reid, both Digicel customers from the telecommunications company’s first year of operation on the island, were both shocked and happy to be in the winner’s circle for the first time. 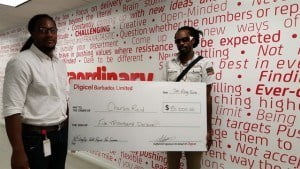 “I have never won anything before and this cash came at the perfect time as I am now about to start my back-to-school shopping for three of my four kids, who are still in school. So this money will come in very handy in getting them ready for next month,” Reid explained.

He added with a laugh: “I didn’t believe I had won at first because I have never won anything before so it was a shock. I always try to win whenever Digicel has competitions but was never lucky. Not even the Fugitive I could catch. So this is great.”

Surage, who is also a first time winner, explained that he too was in disbelief when he got the call: “I thought someone was playing a prank on me. I couldn’t believe it. Even though I have been topping up and was hoping to win, I didn’t expect it.

“I will definitely use this money to purchase back-to-school items and other stuff for my five-year old daughter and I will also spend some of it back with Digicel by upgrading to the Samsung S6 Edge as I am due for an upgrade.”

Digicel’s Marketing Manager, Krystle Smith, congratulated both Surage and Reid, explaining that the winners of the competition so far were definitely proof that the choice to give cash as the prizes for summer was definitely the right one:

“Our first winner used her prize money to upgrade and improve her operation and now our other two winners are using theirs for back-to-school shopping, which are both extremely important activities. This makes us extremely happy to be able to lend our customers a helping hand in the future of their businesses and their children’s education, which we see as investment in the future of the island.”

The Stay Up with Digicel Summer Promotion will see Digicel Customers winning $5000 weekly or the Grand Prize of $50,000 at the end of the promotion. To be eligible, all they have to do is simply top-up with $15 or more; pay their post-paid bill on time and in full; chat for four minutes or more or send up to four or more text messages in a day, for a chance to WIN!