Trotty Strikes Back? “Enter BWU” according to Nation Publishing

The island’s largest trade union has moved from moral support to calling out some of its public sector members for today’s strike action organised by the National Union of Public Workers (NUPW).

(BajanReporter’s NOTE: If the Unions are so serious, then what of the plight of NCC laid off since 2014? Why engage a national strike when schools are on vacation and not during the 11-Plus or CXC as more effective impact? Or during the CARICOM Heads’ Summit for the region to see?) 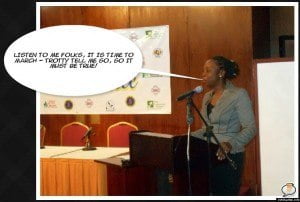 General Secretary of the Barbados Workers Union Toni Moore has called on some of their public sector members to join today’s march, apologies to Daily Nation (PERSONAL FILE IMAGE)

But Prime Minister Freundel Stuart may also be pulled into the row between the Barbados Investment and Development Corporation (BIDC) as Minister of Labour Dr Esther Byer said on Saturday night she solicited the intervention of Stuart. The Prime Minister that same night had said that unless invited, he would not inject himself into the stand-off.