Several of the CDEMA Participating States were shaken Thursday by a burst of earthquakes north-east of Barbados. The Seismic Research Centre at the University of the West Indies, St. Augustine, Trinidad, reported that the first earthquake occurred around 7.01 a.m. and registered a magnitude of 5.9. This was followed by a 6.4 magnitude earthquake at 11.16 a.m. and three other events measuring 4.1 and 5.3 and 3.8 respectively.

The 6.4 magnitude earthquake was reportedly felt in Barbados, Dominica, St. Vincent and the Grenadines, Saint Lucia, Grenada, Guyana, Suriname and Trinidad and Tobago. No tsunami warnings were issued for the Caribbean.

(IMAGE VIA: blog.adoptandshop.org) At the first sign of the earth shaking, if you are in a building, stay inside and away from windows.

The UWI Seismic Research Centre noted that the earthquakes that occurred North East of Barbados are not unusual since the Eastern Caribbean is seismically active and will continue to experience earthquakes now and well into the future. Director of the Centre, Dr Richard Robertson said “the earthquakes today reinforce the need for much greater effort to be made towards building resilience to earthquakes in the region. It is not too late to learn from the lessons of Haiti”

Ronald Jackson, Executive Director of CDEMA, said “the earthquakes today remind us of how vulnerable we are to seismic hazards in the region. This should also be a reminder to member states of the importance of strengthening first responder capabilities and further underscores the urgency of building national capacities for potential catastrophic events.” 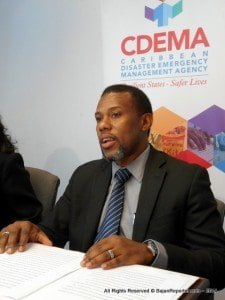 He also added, “The event emphasizes the importance of a Comprehensive Disaster Management approach, as the Caribbean is not only exposed to climate related hazards but also to other hazards such as seismic related events.”

The CDEMA Coordinating Unit takes this opportunity to remind the public of the precautions for earthquake events.

During an Earthquake we should