Welfare of retired race horses to improve thanks to Pinnacle Feeds

The welfare of retired race horses in Barbados is set to improve even more thanks to a new partnership between the Barbados Turf Club (BTC), the HORSE Charity and Pinnacle Feeds.

During the BTC’s recent 3rd Race Day for the season, Pinnacle Feeds presented the HORSE Charity (Human Organisation for the Relief of Suffering Equines) with over $600 worth of feed for rescued horses, a contribution that will be made on a monthly basis. 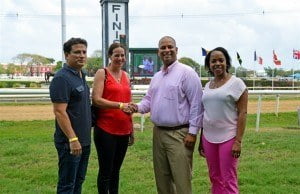 Jason Sambrano of Pinnacle Feeds (second right) presented Monique Archer of the HORSE Charity with monthly feed for the rescued horses the charity cares for at a recent race day at the Garrison Savannah. Looking on are Nicholas Mouttet, the horse owner who conceptualized the partnership, and Rosette Peirce of the Barbados Turf Club which will give the Pinnacle a complimentary ad in its Race Day programmes for a year.

And responding to the generosity of Pinnacle Feeds and the fact that many of the rescued animals are race horses, the BTC decided to give the feed company a complimentary ad in its Race Day programmes for one year.

Jason Sambrano, Director, Pinnacle Feeds said that the company felt moved to give back by partnering with the HORSE Charity. “We have a moral responsibility to take care of horses, some of them former race horses, who are not being properly cared for by their owners or the persons they’ve been given to.”

Sambrano added: “We’d really like to see a transformation in terms of their care and so we fully support what the charity is doing and hope they continue to keep up the good work.”

Monique Archer of the HORSE Charity said that Pinnacle Feeds’ monthly donation would have a “tremendous” impact. “One of the major costs we have is feed for the horses. Our current number of rescues is 20 and knowing that we have the food to keep them in good health is such a relief. We are incredibly fortunate to have this support and very grateful to Pinnacle Feeds. They have committed to provide feed to the charity from here on in and that is such an important aspect in rehabilitating and then maintaining our rescues. As we are a charity, we rely on donations to survive and this means the other funds raised can go to offset our other running expenses,” she said.

She also applauded Nicholas Mouttet, himself a horse owner, who conceptualized the partnership.

Mrs. Archer said that the most common conditions facing the rescued horses at this time of year were dehydration and starvation. “Problems with worms and ticks are also an issue. We have also seen injuries to their legs often due to ropes being wrapped around them and this can destroy a horse very quickly,” she explained.

The HORSE Charity was founded to improve the welfare of all horses in Barbados. Upcoming plans for the charity include the building of a surgical clinic where horses in general can be operated on and receive veterinary care. The charity is also seeking more paddock space for the rescues and persons to adopt some of the rescued animals.