Defending champion driver Leslie Alleyne and navigator Chris O’Neal will be hoping for a hat-trick of victories in the Shell Rimula/Shell Spirax/Simpson Motors Isuzu D-Max, when they take on all comers in this weekend’s Sol Go Further June Safari Rally. 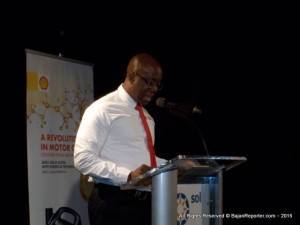 “The June” – the Barbados Rally Club’s (BRC) longest running event, is also arguably the most gruelling navigational rally on the Mud Dogs calendar, and Alleyne and O’Neal will once again be relying on Shell Rimula and Spirax, combined with skill and experience, to see them to their third straight win.

Alleyne recently received some encouragement from Aisha Lockhart of Sol Barbados, as the company officially renewed its sponsorship of the winning pair, and also presented Alleyne with ample supplies of Shell Rimula and Shell Spirax ahead of this 59th edition of the June Rally.

General Manager of Sol Barbados, Ezra Prescod, said: “We are excited to be a part of what has been a winning formula for the Sol Go Further June Safari Rally and we wish Leslie and Chris all the best as they go for a hat-trick of victories next weekend. We have every confidence in their abilities as driver and navigator, and also in the superior quality of our Shell Rimula heavy-duty engine oil and Spirax gear and transmissions lubricants.”

Alleyne will have further incentive to push for a win in this year’s June. The champion driver is presently tied with competitor Wayne Clarke for the most ever June wins at six each, and next weekend’s action could serve as the tiebreaker that settles this long-running battle. 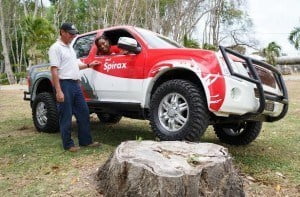 Alleyne said it would indeed be a blessing to add the 2015 June to the list of accolades acquired since partnering with Sol and Shell for the June Safari.

“The June Rally has always been my favourite event and we are definitely looking forward to doing well again this year as there is a lot at stake. The June is a very challenging event requiring disciplined preparation and experience, along with driving skill and navigation. Mechanical reliability is also a must, and we have had excellent results with both the Rimula and Spirax brands of Shell lubricants,” said Alleyne.