A record number of overseas crews are making last-minute preparations for Sunday’s (May 24) LIME King of the Hill, the final shakedown ahead of the Caribbean’s biggest annual motor sport International, Sol Rally Barbados 2015 (May 29-31), at which the Barbados Rally Club is celebrating the 25th Anniversary of its premier event. 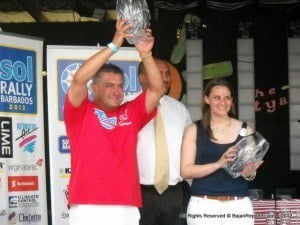 LIME King of the Hill returns to St Thomas, but with huge changes to the course, as it now runs from Hangman’s Hill through the Vaucluse Raceway (VRW), which will host the LIME/Banks/Automotive Art Party Stage, to Lion Castle. The added mileage through VRW makes it the longest KotH course since it was introduced in 2008, at 4.6 kilometres.

From the inaugural KotH at Turner’s Hall in 2008, local drivers Paul Bourne (2008 & ’10) and Skeete (’09 & ’11) shared the first four victories, as it moved first to Stewart’s Hill, then Sailor Gully and Hangman’s Hill. Bird won on the second visit to Hangman’s Hill in 2012, and again last year, after Neil Armstrong had added his name to the roll of honour in 2013, when the venue was Luke Hill in St Lucy.

Highest-placed two-wheel-drive car for the first three years was the Simpson Motors Suzuki Swift, with Sean Gill sixth in his last season in the car (2008), then Ian Warren ninth and fifth, the highest overall KotH finish for 2wd. Armstrong was top 2wd in 2011 & ’12, ninth and eighth, the mantle assumed over the past two years by Roger Mayers, sixth in 2013, eighth last year.

The practice run is slated for 10.00am, followed by three official runs, the fastest of which will decide competitors’ finishing positions. Cars will run in reverse seeding order, from Clubman up to WRC-1, and the top 10 after the first official run will be held back and re-seeded in reverse order to run at the end of the field.

The results of LIME King of the Hill are used to seed Sol RB15; cars which do not compete will be seeded behind the last car in their class, unless safety considerations dictate otherwise. New for 2015 is a Saturday morning reseed after Friday night’s first two stages at Bushy Park Barbados, in addition to the traditional Sunday morning reseed based on the overnight classification.

• RallyFM.net will again be broadcasting live commentary from LIME KotH and Sol RB15. There are four ways to listen: on a PC or laptop, go to www.rallyfm.net and click on ‘Listen Live’; to listen on your smart phone or tablet, go to www.rallyfm.net and click on ‘Listen Live’; download the TuneIn Radio app and search for RallyFM; download the Ustream app and search for RallyFM.net
• Early Bird ticket specials are available for the Friday evening start and Sunday afternoon finish of Sol RB15 at Bushy Park Barbados: tickets can be purchased in advance at all Automotive Art stores, Sol Banyans, Redman, Six Roads, Speightstown, Warrens and Wildey and on-line at www.bushyparkbarbados/buy-tickets. All general spectator parking is in the south, VIP and Clubhouse parking in the north, and Xpress entry is available for patrons with pre-purchased tickets and no coolers or bags to be checked by security. On Sunday, gates open at 1.30pm, with SS22 scheduled to start at 3.00pm, followed by the Rally Finish Party