Miller was accosted by a number of men when a dispute ensued and he was shot in his upper body. He died at the scene.

Police have detained three men in connection with an ongoing investigation into a serious offence. 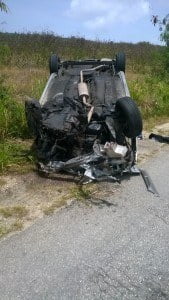 These men are suspected to be involved in a criminal matter and were the subject of a police pursuit in the Farley Hill area sometime after 11:55 on Thursday 16 April 2015. The vehicle they were travelling in overturned at Benny Hall, St. Peter, and they were detained.

The men received lacerations and bruises about their bodies and were transported to the QEH by ambulances, where they remain under police guard.