“Badejo’s Salted Tongues … by way of a tour, from city streets, to countryside, to seashore” by Sir Jay B. Haviser

Salted Tongues! A flood of vivid images and impressions come to mind with the phrase, ranging from bittersweet sarcasm to restricted speech to lumps of flesh in brine! With this book of insightful and explorative essays about culture, language, literature history, “indigenous” book publishing, and the role of literary criticism, Fabian Badejo has brought to us the entire gambit of those impressions, adding elements of social and political commentary. And yet above that, he has made a most outstanding contribution to the dynamic of Pan-Caribbean cultural development, with his message that we must represent ourselves as a distinctive culture and as a region.

He has utilized the island of St. Martin, as a petri dish for understanding the entire Caribbean region, seeing in the microcosm the macro issues. And from his petri dish he has revealed the singularly most destructive disease that has affected the Caribbean region for hundreds of years, the plague of Euro-centrism. Just as any medical student would use a new discovery to find a cure, so too has Badejo offered a cure, with Salted Tongues as a key ingredient.

Salted Tongues – Modern Literature in St. Martin first takes us on a stroll through the streets of literature heritage for St. Martin, identifying persons and institutions that have been the creative force behind development of the arts for that island. As we pass through the various ruins and modern constructions of those literary streets, we are constantly reminded of the centrality of Lasana Sekou’s Old Salt Pond (The Great Salt Pond), where the spring of inspiration resides.

We are over and again confronted with the complexity that foreign tongues have created for our world in the Caribbean, so many different means of communication, so many different ways of thought, yet it is those Salted Tongues that speak true to the Caribbean soul. Those Salted Tongues that speak of personal lives and individual emotions, of daily struggle filled with both joy and pain, of pride and determination to maintain an identity and family of Caribbean peoples.

As we leave the streets and move to the countryside, Badejo speaks of the barriers that have constrained our use of Salted Tongues, the deception of literary traditions that force foreign values, style and critical evaluation of Caribbean writers. That we have been caught in the box of Eurocentric critique, that we must aspire to them and study with them, to be accepted by them. Salted Tongues will hear none of this, for the Caribbean creative spirit is not a European box; it is the African-descendant amorphous form of elongation, unity, and adaptation.

When double-entendre, puns, and word-play are combined with unique linguistic distinctiveness, it can only be evaluated by its own standards and values. Classical themes do find their expression through Caribbean pens, but they must use Caribbean blood to write with. Badejo has expressed the outrage of many Caribbean writers that the literary capital of the Caribbean is still not in the Caribbean.

As our stroll takes us from the countryside to the seashore. Salted Tongues provides us with a guide to the future, a means to chart our course of exploration beyond individual island shores, towards interconnecting and unifying our Caribbean homeland. Badejo offers us a detailed model for creating an authentic Caribbean Literary Tradition, distinctive of our role at the crossroads of linguistic, political, cultural and socio-economic convergence. 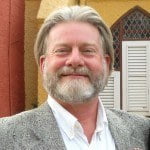 (Editor’s Note: Sir Jay B. Haviser, PhD, is an archeologist and author. The above is an updated overview of the launch address of Salted Tongues – Modern Literature in St. Martin [2005]. Salted Tongues is available at Van Dorp, Arnia’s, Amazon.com, Bookishplaza.com, SPDbooks.org, and other bookstores.)

A Caribbean Tradition that requires four pillars to survive; creativity stimulation, publication facilities, internal critical evaluation, and increased readership. As a professional critic himself, Badejo gives ample attention to the importance of developing a Caribbean-based literary criticism, including a new paradigm for a Caribbean critical tradition, the pillars of which are entrenched in our authentic folk traditions, with the criteria of reflecting distinctively Caribbean aesthetics.

Salted Tongues takes the complex contradictions, dualisms, and dichotomies of literary development in St. Martin, and shows us a mirror of the Caribbean.
Salted Tongues is the medicine for the universal soul of Caribbean writers, and challenges us to realize that it is the responsibility of all writers in colonial and post-colonial societies to raise the consciousness of their people in a struggle for independence and respect for the distinctiveness that is Caribbean Culture.