Scotiabank revealed it will be closing its Blackrock branch, effective June 12th, 2015. The closure is part of the global restructuring exercise which was announced by Scotiabank’s CEO Brian Porter in November 2014.

Scotiabank Caribbean East’s managing director David Noel met with staff at the Black Rock branch today to speak about the changes. Noel acknowledged: “We are conscious that the consolidation or closure of branches can have a significant impact on our customers, colleagues and communities. This decision was not taken lightly.” 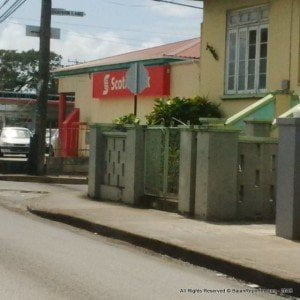 The closure follows Scotiabank’s global review of its operating model and international distribution network. This review uncovered opportunities to streamline operations and also identified branches which were located in areas of slow growth.

Noel stated that the restructuring took into account changing banking habits and Scotiabank had already invested in strengthening its electronic and self-service banking channels, including online and mobile banking and ATMs.

Noel also noted that the closure should not result in any staff cuts. “As difficult as it has been to have to make this decision, we have been able to reassign all of the Black Rock branch employees to other positions within our business network, so customers will continue to see their familiar faces,” he said.

He said that letters are being sent out to customers to advise them of the change and how it will impact them. He also noted that Scotiabank intends to retain an ABM in Black Rock to accommodate the needs of customers who live and work in the area.

“We are focused on how we can continue to better serve our customers and provide advice and solutions tailored to meet their financial needs,” concluded Noel.