Victor Mooney announces today that he’ll continue his transatlantic row in tribute for his brother who died of AIDS in 1983 and to encourage voluntary HIV testing. Mr. Mooney was robbed while heading home late last year after rowing across the Atlantic Ocean. 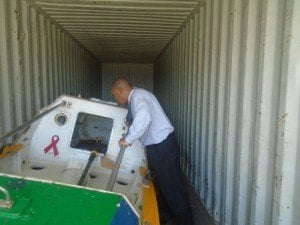 Victor Mooney of Queens, New York looks at the Spirit of Malabo inside a shipping container at the Haitian Coast Guard base in Cap Haitian

“The partnership between US, Equatorial Guinea and Haiti proved great dividends. It’s an honor to say “that working together, dreams do happen“. The Haitian Coast Leadership was outstanding and Chief Wegeens at Cap Haitien Base, remained pivotal”, said Victor Mooney

“For our mission, we are a step closer to reaching an AIDS free generation. And another thumbs up to Globecomm, who once again kept me connected with my family and partners for this mission. Naturally, there are many others to say thanks to, but this group went above and beyond“, Mooney added.

The rower looks to begin the 1,500 mile row back to New York’s Brooklyn Bridge during the Miami International Boat Show in Miami this February. Mr. Mooney arrives back in New York on Friday.