So get a load of this one…

My Sister and I took my mom shopping yesterday and we decided to eat in Burger King Barbados… the one on the Bridge in Bridge Street Mall in Fairchild Street after I recommend the place because the Caesar Salads are fresh and pretty decent. Had I been made aware that the salads now come with vagrant I would’ve eaten elsewhere!

Yes I said it comes with VAGRANT! Now for the interesting part…

We proceed to order and low and behold, much to my surprise… and future dismay I might add, a vagrant STROLLS RIGHT PAST THE SECURITY GUARD… AND… MAKES HIS WAY RIGHT UP TO THE CASH REGISTER HARASSING MY SISTER FOR A DOLLAR… The fact that this goes on for a good 2 to 3 mins finally pushes my annoyance into a meltdown. So I square him up quickly and he begins to shout at me. I have little to no tolerance for abusive vagrants so I shout back he comes to the realization that I will put him down without a second thought and leaves… or so I thought. 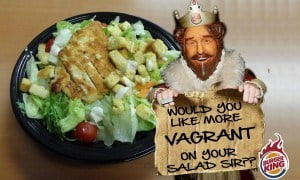 We’re getting our food and guess what… I notice him at the door chatting with the security guard, ok… so what right? Before we can sit properly and I can get to enjoy my salad, he CHARGES OVER TO OUR TABLE CUSSING AND CARRYING ON!!!

My head starts to boil and A PAIR OF TOURISTS RUN AND LEAVE THEIR FOOD WHEN MY NEPHEW AND STEP TO HIM… putting ourselves between my mother, his mother (my sister) and my niece (his sister). My sister throws herself between us begging us not to get into any trouble… MEANWHILE… THE GUARD JUST STANDS THERE… NOW LITERALLY NEXT TO THE VAGRANT AFTER I HAD TO CALL HIM TO COME FOR THE PARRO ASS BEFORE I SHUT DOWN BK… DOING WHAT I CAN ONLY CALL PRETENDING TO SHOW INTEREST.

In short, he puts his bag on the floor ready for war and says something about stuffing my sisters money in her mouth and waving his hand in her face and we spend the next 5 minutes with me trying my best not to go nuclear and my sister holding back myself and my nephew from redecorating Burger King with this johnny… WHILE THE GUARD AND BURGER KING STAFF SPECTATE before this parro realizes both my nephew and myself have no reservations about flattening him. His only saving grace was that it was my mother’s day and I didn’t want it marred by any incident.

Had my father been there it would have been a different story since he’s the ask questions later, if at all type… Then Bajans would’ve been talking ’bout how 3 men unfair a parro and want locking up.

Look how I nearly had to spend the weekend in central… This experience has removed my last ounce of tolerance for these aggressive vagrants that demand money(like the one that ran from the jumpkick when he tried to corner me in the ATM last year)… and for Burger King salads.

1. NO ACTION FROM THE SECURITY PERSONNEL: Even tho I called him several times to remove this creature before I shut down the establishment. Further more he should never have been allowed inside, far less up to the counter where patrons collect food.

2. NO INTERVENTION FROM MANAGEMENT WHATSOEVER:
Where… oh, where the actual ass was management in the 10 minutes this went on for?

3. I’m sick and tired of vagrants demanding my RH money!

Oh… and look what just fell into my lap? CLICK FOR BIGGER

EDIT:
My father promptly told me last night when I got home that he would’ve wash both the parro and the guard in licks… Just thought I’d share that so you get an idea of how tear this man head really is.

My mother on the other hand was quite relieved that she didn’t have to deliver the kick from his blind side like she was planning to but more so … also very proud of my nephew and myself for not destroying Burger King and keeping her at Central at ungodly hours of the night.