Some analysts believe that 2014 ushered in a new era of Cold War-style geopolitics. Russian President Vladimir Putin’s invasion of Ukraine and annexation of Crimea was met with heavy economic sanctions from Europe and the United States, weakening Russia’s ties with the West and leaving the Kremlin eager to strengthen ties with China. The question is whether Russia will manage to build a real alliance with the People’s Republic.

At first glance, it seems plausible. Indeed, traditional balance-of-power theory suggests that US primacy in power resources should be offset by a Sino-Russian partnership.

Perhaps more convincing, there seems to be historical precedent for such a partnership. In the 1950s, China and the Soviet Union were allied against the US. After US President Richard Nixon’s opening to China in l972, the balance shifted, with the US and China cooperating to limit what they viewed as a dangerous rise in the Soviet Union’s power. 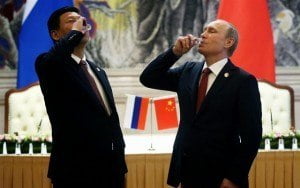 (IMAGE VIA – scgnews.com) With the collapse of the Soviet Union, that de facto US-China alliance ended, and a China-Russia rapprochement began. In 1992, the two countries declared that they were pursuing a “constructive partnership”; in 1996, they progressed toward a “strategic partnership”; and in 2001, they signed a treaty of “friendship and cooperation.”

In recent years, China and Russia have cooperated closely in the UN Security Council and taken similar positions on Internet regulation. They have used diplomatic frameworks – such as the BRICS group of major emerging countries (along with Brazil, India, and South Africa) and the Shanghai Cooperation Organization (along with Kazakhstan, Kyrgyzstan, Tajikistan, and Uzbekistan) – to coordinate positions. And Putin has struck up a good working relationship with Chinese President Xi Jinping, based on their shared domestic illiberalism and desire to counter American ideology and influence.

Their economic relationship, too, seems to be progressing. Last May, shortly after the annexation of Crimea, Russia announced a $400 billion deal to supply 38 billion cubic meters (bcm) of gas to China annually for 30 years, beginning in 2019.

The contract, between Russia’s state-owned energy giant Gazprom and the China National Petroleum Corporation, entails the construction of a 2,500-mile gas pipeline to China’s Heilongjiang province (where, incidentally, the two countries nearly went to war a few decades ago). Though the exact price remains secret, it appears that Russia offered major concessions, after nearly a decade of negotiations, to ensure the deal’s success.

Moreover, in November, Gazprom announced a framework agreement to deliver an additional 30 bcm of gas to China’s Xingjiang Province from western Siberia for 30 years via another new pipeline. If the “eastern” and “western” pipelines are completed as planned, the 68 bcm they deliver to China annually would dwarf the 40 bcm that Russia exports to its current largest customer, Germany.

This may seem to portend an ever-deepening bilateral relationship. But there is a hitch: the gas deals amplify a significant bilateral trade imbalance, with Russia supplying raw materials to China and importing Chinese manufactures. And the gas deals do not make up for Russia’s lost access to the Western technology that it needs to develop frontier Arctic fields and become an energy superpower, not just China’s gas station.

In fact, the problems with a Sino-Russian alliance run even deeper. With its economic, military, and demographic heft – China generates considerable unease in Russia. Consider the demographic situation in eastern Siberia, where six million Russians live across the border from up to 120 million Chinese.

Furthermore, Russia’s economic and military power has been in decline, whereas China’s has exploded. Anxiety over China’s conventional military superiority probably motivated, at least partly, Russia’s 2009 announcement of a new military doctrine explicitly reserving the right to first use of nuclear weapons – a stance that resembles America’s Cold War force posture, aimed at deterring superior conventional Soviet forces in Europe. These imbalances suggest that Russia would resist a tight military alliance with China, even as the two countries pursue mutually beneficial tactical diplomatic coordination.

China’s willingness to cooperate with Russia also has its limits. After all, China’s development strategy depends on its continued integration into the world economy – and, specifically, reliable access to American markets and technology. The Chinese Communist Party’s legitimacy depends on strong economic growth, and it will not risk this strategy for some “authoritarian alliance” with Russia. 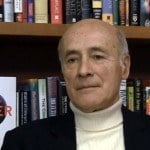 (IMAGE VIA – polirom.com) Joseph S. Nye, Jr. is a professor at Harvard University, Chairman of the World Economic Forum’s Global Agenda Council on the Future of Government, and the author of the forthcoming book Is the American Century Over?

Even within multilateral forums, the relationship between Russia and China is far from balanced. Given that China’s economy is larger than the other four BRICS economies combined, the group’s initiatives – including its new development bank – are likely to reflect a disproportionate Chinese influence. And though the Shanghai Cooperation Organization has facilitated some diplomatic coordination, China and Russia remain locked in a struggle for influence in Central Asia.

The Sino-Russian alliance in the twentieth century was a product of China’s weakness following World War II and at the beginning of the Cold War – and, even then, it lasted little more than a decade. Today’s China is strong, and unlikely to get too close to a Russia whose decline has been accelerated by its leader’s poor judgment.

In short, when it comes to a Sino-Russian alliance challenging the West, history is not likely to repeat itself. Contrary to Putin’s hopes, 2014 will not be remembered as a year of successful Russian foreign policy.