It was double success for Grenadians on Sunday, 2 November 2014 when runners in both New York and Grenada successfully completed marathons to help raise funds for the charity, reachwithin, which supports vulnerable Grenadian children and their caregivers . 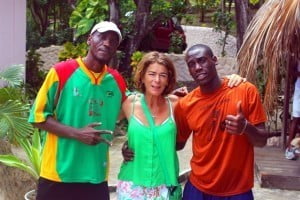 Grenadians Philomena Robertson and Anderson Simon took to the chilly streets of New York alongside over 50,000 runners at the 2014 TCS New York City Marathon.

Jerry, Dennis and friends crossing the famous colourful bridge leading to the town of Gouyave.

Robertson, who is a media professional and currently lives in the British Virgin Islands, finished the course in five hours and twenty minutes (5.20.25). Simon, Director of the Child Protection Agency in Grenada, crossed over the finish line in six hours and six minutes (6.06.11). 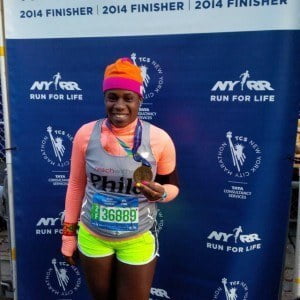 Philomena Robertson with her medal after the 2014 TCS New York City Marathon.

Meanwhile, in Grenada, Jerry Bascombe, Youth Programme Coordinator with reachwithin and Dennis Mason, a reachwithin mentor, were simultaneously running their own race. Disappointed to learn that they would not be attending the New York marathon this year, they organised their own which followed the west coast of Grenada, from St George’s to Sauteurs. 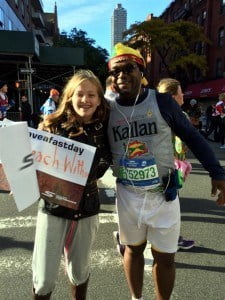 Anderson Simon (and suppporter) just before the start of the 2014 TCS New York City Marathon.

Inspired by their cause and to demonstrate their love and respect for both Jerry and Dennis, up to eighteen friends and family joined them on their quest including residents of Father Mallaghan’s home for boys in Victoria. Less of a race but more a test of endurance, and after running close to 27 miles, they all triumphantly arrived at the end destination of the Petite Anse Hotel, Sauteurs in just under six hours.