What is language? Tina Chang looks to answer Friday night at 3W’s Pavilion

For Brooklyn Poet Laureate Tina Chang, poetry is not “lofty.” As a matter of fact, one of her chief goals is to “demystify the role of the poet.”

Of Chinese descent and raised in New York City, Ms. Chang is the first woman to be named the Poet Laureate of Brooklyn. But what exactly is a Poet Laureate? A poet laureate is a poet officially appointed by a government or conferring institution. Laureates receive a stipend and are given the responsibility of overseeing an ongoing series of poetry readings and lectures, as well as a charge to promote poetry. Ms. Chang said that as the Brooklyn Poet Laureate, she wants to create a website spotlighting other borough poets. 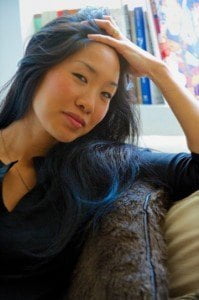 Her interest in poetry began from a very early age. Born in Oklahoma to Chinese immigrants, Ms. Chang moved to New York when she was a year old, so her father could be treated for liver cancer at Memorial Sloan-Kettering Cancer Center. “I started questioning even at a very young age, well, what is language?” she said. “What is the role of words?”

After pursuing a string of English-related jobs, Ms. Chang enrolled in a master of fine arts program in poetry at Columbia in 1995.

Her first book “Half-Lit Houses,” a collection of poems tracing the life of a girl who loses her father back to Hunan, China in the 1930s and ’40s, was published in 2004. She is also the author of the poetry collection “Of Gods & Strangers.” Ms. Chang has received awards from the Academy of American Poets, the Barbara Deming Memorial Fund, the Ludwig Vogelstein Foundation, the New York Foundation for the Arts, Poets & Writers, and the Van Lier Foundation among others.

She currently teaches poetry at Sarah Lawrence College and is an international faculty member at the City University at Hong Kong.

Ms. Chang will showcase her poetry during evening public events, which will highlight the diversity and modernity of American literature, as well as allow her to share her opinions on poetry’s relevance and give insight on her creative process.

This series of public readings will also help the U.S. Embassy recruit candidates for the International Writers’ program (IWP), the Department of State’s premier exchange program for creative writers.