Tina Chang, Brooklyn, New York’s Poet Laureate, will showcase her poetry during a free, evening public event in Barbados. This evening of poetry will showcase the diversity and modernity of American literature. It will also allow Ms. Chang to share her opinions on poetry’s relevance and give insight on her creative process.

The cultural industries contribute to a vibrant, prosperous society. The program aligns with the U.S. Embassy’s goals of investing in people through education and promoting social equity. The showcase at UWI’s 3W’s Pavilion enables the U.S. Embassy to recruit candidates for the International Writers’ program (IWP), the Department of State’s premier exchange program for creative writers.

Tina Chang is the Poet Laureate of Brooklyn. The first woman named to this position, she was raised in New York City.

She is the author of the poetry collections Half-Lit Houses and Of Gods & Strangers (Four Way Books) and co-editor of the anthology Language for a New Century: Contemporary Poetry from the Middle East, Asia and Beyond (W.W. Norton, 2008) along with Nathalie Handal and Ravi Shankar. 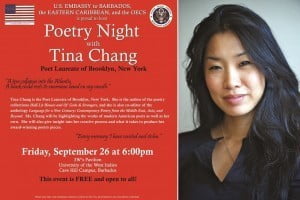 Her poems have appeared in American Poet, McSweeney’s, Ploughshares, The New York Times among others. (CLICK FOR BIGGER)

Her work has also been anthologized in Identity Lessons, Poetry Nation, Asian American Literature, Asian American Poetry: The Next Generation, From the Fishouse: An Anthology of Poems and in Poetry 30: Poets in Their Thirties.

She has received awards from the Academy of American Poets, the Barbara Deming Memorial Fund, the Ludwig Vogelstein Foundation, the New York Foundation for the Arts, Poets & Writers, the Van Lier Foundation among others.

She currently teaches poetry at Sarah Lawrence College and is an international faculty member at the City University at Hong Kong.