ELOMBE MOTTLEY was a teenager in Barbados doing his A-levels when the spirit of activism fired up his first act of revolution – the publication of a highly critical paper on his English headmaster and the Government of his paradise Caribbean isle.

Son of Ernest Deighton Mottley – a former politician and mayor of Bridgetown – the young pupil was already acutely aware of the imbalance of power which allowed a white minority to dominate a black majority.

“It was something we had run off a stencil, but we were forced to go around and buy back the paper from everyone we had sold it to,” the cultural historian, activist and author told The Voice.

But the 76-year-old, whose activism is said to have spread to the rest of the Caribbean and inspired the likes of the former politician, revolutionist and Grenadian prime minister, Maurice Bishop, had aspirations to become a medical doctor. 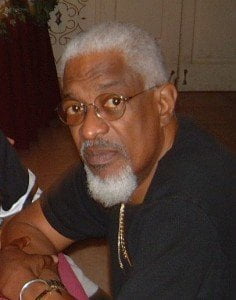 Mottley left Barbados to study medicine in Canada, but during his pre-med studies, he decided to change course and went to the US where he did accountancy and finance and an arts course instead.

Travelling through Midwest America in the early 1960’s, he was exposed to the upheaval at the height of the civil rights movement.

“My university in New York was near the theatre district where there was a lot of experimental work happening and many artists that were involved in folk music,” he explained. “I started looking for Barbadian folk music. I found music from every other Caribbean island but nothing from my own country. Then I spoke to some anthropologist at NYU. They told me that most people in the profession considered Barbados too white. Our culture was being stifled, and the 90 per cent black majority was unable to challenge anything associated with Britain. That set me off!”

When Mottley completed his education and returned to Barbados, he started to record and document Barbadian folk music. He also began to raise questions about identity and race.

“I realised that even though emancipation had happened black people were still boxed in – though not physically, but psychologically. There were certain clubs in Barbados we could not join in cricket, in sports and swimming. This unspoken segregation had become accepted as the norm. But I refused to accept it and in order to silence me they accused me of being a racist.”

The activist started challenging white-owned institutions and took on the might of US telephone company Continental Telephone.

“This was a company with an all-white board of directors, who owned businesses across the Caribbean and they were overcharging us – raising telephone rates by 800 per cent. I campaigned against this for 18 months.” Mottley also used the theatre to fight for change.

“I formed a group to present plays based on the work of black writers like Derek Walcott. I also created a group called Black Night to encourage writers to use our national language.

“In addition to English I was using the Bajan language in my own work. First because I write for popular consumption and there are words in the Bajan language that are more expressive, that captures the meaning I want to convey and tugs more on the emotions than its equivalent in the English language.” (THE REST OF THIS ALERT ON A GREAT BOOK SERIES CAN BE FOUND BY CLICKING HERE)