Set in downtown New York in 1900, The Knick – short for The Knickerbocker Hospital – centers on the trailblazing surgeons, nurses and staff pushing the boundaries of medicine in a time of shockingly high mortality rates and zero antibiotics. The hospital is in a state of turmoil due to a decline in affluent patrons and an increase of poor patients, combined with a severe mishandling of its finances, but brilliant lead surgeon John Thackery (Golden Globe® winner and Oscar® nominee Clive Owen, also Emmy® nominated for HBO’s Hemingway & Gellhorn) tests the limits of medicine, morals and race relations in an era where social norms were slow to change. Directed by Oscar® winner Steven Soderbergh (also Emmy® winner for HBO’s Behind the Candelabra), The Knick will premiere on MAX on August 15th in the Caribbean and has already been confirmed for a second season. 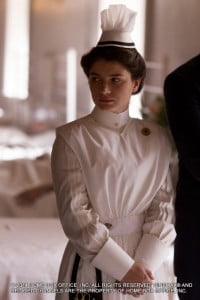 Throughout this season’s 10 episodes, all of which are directed by Soderbergh, the series shows how the combination of skill, pride and luck influenced the evolution of modern medicine and how the growing technology boosted the Industrial Revolution to new and unchartered heights. 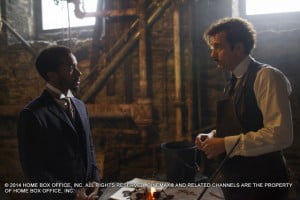 Despite developing a severe addiction to cocaine (legal at the time), the ambitious and arrogant Doctor John Thackery remains one of the hospital’s stars as he pioneers new methods in the field. Against his will, he is eventually paired with an equally gifted young doctor named Algernon Edwards (André Holland), the only member of color of his graduating class at Harvard, whose intelligence and at-all-costs methods rivals Thackery’s; however, his arrival to the hospital is met with resentment from fellow doctors and prejudice from patients. (Photo Credit: Mary Cybulski/Cinemax)

Cornelia Robertson (Juliet Rylance) serves as head of the hospital’s social welfare office and as chair of its board of trustees as proxy for her father, shipping tycoon Captain August Robertson (Grainger Hines). Cornelia exerts significant influence at the hospital and pushed for the hiring of Edwards over Thackery’s protégé, Dr. Everett Gallinger (Eric Johnson), who was hoping to be named assistant chief surgeon prior to Edwards’ arrival. Meanwhile, Herman Barrow (Jeremy Bobb), the Knick’s crooked and greedy superintendent, is inundated with debt and willing to risk the hospital’s future to pay it off; 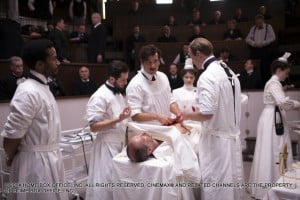 Other characters include Dr. “Bertie” Chickering Jr. (Michael Angarano), an eager young surgeon secretly in love with a naïve young nurse from West Virginia, Lucy Elkins (Eve Hewson), who is drawn to Thackery; Sister Harriet (Cara Seymour), an Irish Catholic nun with a secret life, who runs the orphanage and maternity ward; Tom Cleary (Chris Sullivan, HBO’s The Normal Heart), the crude and jovial ambulance driver who gets kickbacks for bringing rich patients to the hospital and is willing to stoop to the lowest levels in order to do so; Health Inspector Jacob Speight (David Fierro), who exploits the perks of his position, demanding a finder’s fee for every patient he bring in; Eleanor Gallinger (Maya Kazan), a new mother and Everett’s devoted wife, eager to see her husband succeed; Dr. J. M. Christiansen (Matt Frewer), the dedicated chief of surgery, for whom failure is not an option; and Jesse Edwards (Leon Addison Brown). {Photo Credit: Mary Cybulski/Cinemax}