The Return of “RELATIONSHIPS” with Sandy Daley: ‘Forgiveness Begins with the Man in The Mirror!’

The late Maya Angelou once wisely wrote, “You can’t forgive without loving, and I don’t mean sentimentality. I don’t mean mush. I mean having enough courage to stand up and say, ‘I forgive. I’m finished with it.'” 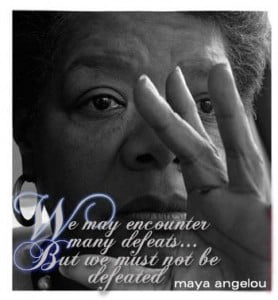 {IMAGE VIA – walkingwithnora.com} “You can’t forgive without loving, and I don’t mean sentimentality. I don’t mean mush. I mean having enough courage to stand up and say, ‘I forgive. I’m finished with it.'”

A very tall order for many of us indeed, but one that must be adhered to if we wish to move on. Are you able to move on? Can you truly forgive someone, no matter what they have done to you, and be totally done with the subject?

The unfortunate thing for many of us is that after the break-up of a relationship, we insistently hold unto the baggage that came along with that situation; not realizing that we are resisting our own joy and happiness.

The ultimate revenge they say is living well, and living well begins with the man in the mirror.

Many a time, we become so fixated with the other person and the “wrongs” they caused us, that we’re unable to see we’re blocking our own path to happiness. When you forgive, you are ultimately forgiving your own self first, allowing your heart to become healed.

We must learn to “let it go.” Difficult as this may seem, this is quite do-able if we allow the pain of the situation to really sink in, and then we can finally release and erase the entire situation from our minds.

“But Sandy, how can you truly just suggest that I forgive what Donovan did to me?” my girlfriend Jacquie queried the other day while dining over lunch. “I mean the man lied to me for over 10 years by having another woman on the side the entire time that we were together.”

“Plus I found out that he has a child on the way with this other woman. How in the world can I ever forgive him? “, she asked me with tears streaming down her face.

“Because of this situation right here,” I said to her sternly. “The fact remains that you are here crying, and thinking about him and “what he has done to you“, and I bet you my last dollar that he is not thinking about you at all,” I continued. “Do you get my point?” She nodded her head and hugged me tightly, as if to say that I was finally making sense to her.

“You forgive him, not because he deserves it, but because if you don’t, it will continue to eat you alive, and you will be unable to move on with your own life. Do it not for him, but do it for yourself,” I said to her lovingly as I handed her a tissue to wipe her tears: along with a hug of course. 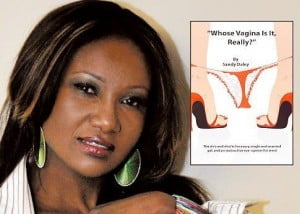 Award-winning author, radio and TV personality, Sandy Daley‘s controversial first novel, “Whose Vagina Is It, Really?” has literally taken the world by storm. The book, dedicated to the single and married woman, often discussed, argued and recommended by many, details the lives of women in a modern world.

Your ultimate goal is to live as peacefully and as happily as you can: and peace begins with you. In order to accomplish happiness and serenity within your soul and at home, you must learn to let go of the things that hold you back: that hinder you from attaining your joy. Holding unto hurtful situations or having hatred within your heart does not go with the overall plan that God has for you.

So learn to let go of things; and forgive those that have hurt you; as in the end your rewards will be plentiful. Forgiveness plays a major role in your prosperity: no matter how hurtful others have been to you in the past.

Once you forgive those that have done you harm, you will ultimately reap the rewards at the end of life’s long and tedious journey.