The inaugural Rugby Barbados Midland Rugby Sevens was staged over the weekend of May 31st-June 1st at Sutton Coldfield Rugby Football Club, Birmingham, England. The event, sponsored by co-title sponsors The Tourism Development Corporation and The Barbados Tourism Authority, was appropriately won by a Barbadian team, much to the delight of the members of the local Barbados Association who were there in numbers to support their teams. 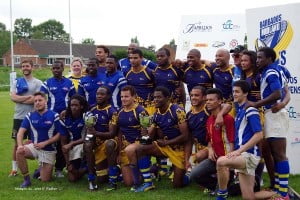 Barbados fielded two teams, Flying Fish and Cou-Cou, in the two-day tournament which was played in near perfect conditions, with a festival atmosphere, from the food stalls selling Bajan delicacies, to the music which included steelpan for a true ‘island feel‘. Flying Fish started slowly on Day 1 finishing with one win and three losses including a 7-5 defeat to Cou-Cou and close losses to Leicester Lions, a National 2 side, and the home team Sutton Coldfield, a national three side. Cou-Cou ended Day 1 with two wins including a 21 -12 win over eventual finalists Leicester Lions.

Day 2 saw both sides gel together. Flying Fish easily handled Sutton Coldfield, running out winners by a margin of 35-0, and followed this up with two close wins over Cou-Cou to reach the Cup Final against Leicester Lions. Down 17-7 at the half, Flying Fish stepped it up in the second half to win the tournament with a score of 26-17. Cou-Cou bounced back from close losses to Flying Fish and Leicester Lions to win convincingly in the Plate Final with a 24-7 victory over Sutton Coldfield. 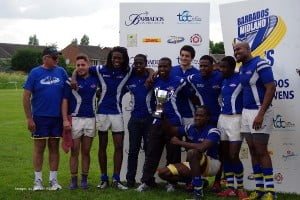 Companies interested in joining this exciting initiative leading up to the Commonwealth Games may contact Union President George Nicholson at gnicholson@adebbarbados.com

Coach Joe Whipple commented, “It was a good weekend from the perspective of the facilities which were first class, to the support from the members of the Barbados Associations, to the response of our players who worked hard all weekend. In terms of play, I thought that all of our players showed they can play a good level of Rugby Sevens. We will build on these performances and I am confident we will continue to improve. Our goal of having a pool of over 20 players is becoming a reality. We will have four new players joining us this weekend for a tournament in Brighton, so it is important that we maintain a high level of consistency.” 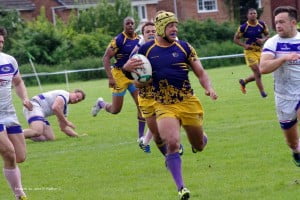 The Rugby Barbados Sevens squad is participating on the UK Summer Sevens circuit in preparation for the 2014 Commonwealth Games in Glasgow, Scotland, in July. They are sponsored by the Tourism Development Corporation and the Barbados Tourism Authority (co-Title Sponsors), Intimate Hotels of Barbados (Gold Sponsors), DHL (Barbados) Limited (Silver Sponsors) and Bougainvillea Beach Resorts (Bronze Sponsors).

The BRFU has launched the Brand Barbados Initiative marketing campaign around the squad’s presence in the UK in order to provide marketing exposure for Barbadian companies and services, with an emphasis on the Barbadian Tourism product. The BTA’s UK office has been liaising with the various Barbados Associations across the UK to ensure that there is a strong Barbadian presence at each of the seven tournaments in which the team will be participating, thus maximizing the marketing impact.