Police have arrested and charged Andre Omar Jackman, of Stroud Bay, Crab Hill, St. Lucy who’s expected to appear at the District A Magistrates Court on Saturday 3rd May 2014.

The 35 year old businessman was remanded to HMP Dodds yesterday when he appeared in court charged with a City murder. 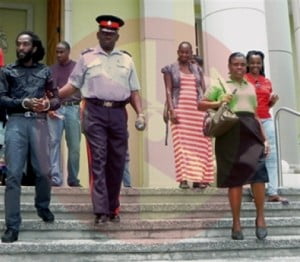 The 35-year-old, also known as “Punchie” or “Lord Evil” was not required to plead to the charge that he shot and killed Charley Dume on April 25 while at a bar at the corner of Nelson Street and Wellington Street, St Michael. Dume died later at the Queen Elizabeth Hospital?while undergoing surgery. {IMAGE VIA – nationnews.com}

Jackman, however, pleaded not guilty to assaulting Sergeant Richard Parris in the execution of his duties on April 19.

Attorney at law Arthur Holder, who is representing the accused, told the court that he intended to apply for a paper committal for the murder trial – which would bypass a preliminary enquiry and send the case straight to the High Court.

Acting Magistrate Alliston Seale noted his request and set down May 30 as the next court date.