When almost 300 golfers take to various courses around the island between May 1st and May 4th to take part in the annual Sir Gary Sobers Golf Championships, they, like Digicel will be paying homage to Barbados’ only living national hero, the Right Excellent, Sir Garfield Sobers.

For the past 10 years, Digicel has been a supporter of the tournament, which year on year has seen an increase in the influx of players coming from the Caribbean, USA, Canada, UK; and also countries such as Italy, Germany and Northern Ireland.

Commercial Director of Digicel (Barbados) Limited, Alex Tasker, noted the contribution which the tournament has made to Barbados over the years, from the point of view of being responsible for exposing Barbados to the world, first through media coverage; and secondly via word of mouth recommendations from players who travel to the island to take part, accompanied by their families. 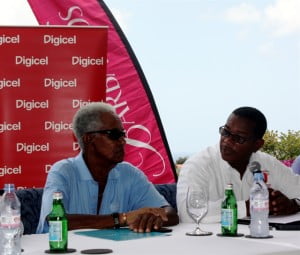 Speaking at the launch of this year’s tournament, Tasker also spoke to Digicel’s relationship with Sir Gary, noting his commitment to the company and his support of the brand:

“Sir Gary has always been a friend to Digicel, supporting us from inception and throughout the last decade of our existence here in Barbados. He is the embodiment of every one of the brand promises Digicel has made and lived up to over the last ten years. With Sir Gary, you expected more and you got more. Sir Gary was and is Bigger and Better; and from the time he could walk, Sir Gary has always been Extraordinary.”

Tasker noted that it was fitting that the annual golf tournament takes place right after Barbados celebrates National Heroes Day, recognizing a great man, who has done and continues to do great things for the small island of Barbados.