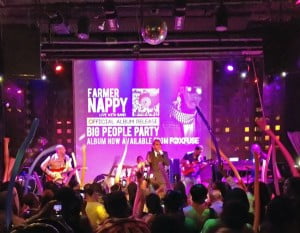 For more information on Farmer Nappy, log on to FOXFUSE.com/clients/farmernappy, or follow his moves at Facebook.com/FarmerNappy, Twitter.com/1FarmerNappy and Instagram.com/FarmerNappy. For management inquiries, contact Country Life Entertainment at countrylife.entertainment@gmail.com and for bookings, contact farmer.bookings@gmail.com. Please direct all media inquiries to the FOX FUSE Publicity Department at 212-300-3813 or contact@foxfuse.com.

Internationally-acclaimed Trinidadian soca star Darryl “Farmer Nappy” Henry officially launched his new album Big People Party to a full-capacity crowd at legendary New York City concert venue Sounds Of Brazil (S.O.B.’s), on April 13, 2014. His third, full-length studio effort Big People Party was released worldwide in stores and online on February 25, 2014 from FOX FUSE, but since it was in the midst of Trinidad’s Carnival season, Farmer was only now able to journey to the media capital of the world, New York City, to promote his new album to media and fans there. Presenting a soca showcase and a free event at that, Farmer breaks new ground for soca music and the culture of Trinidad and Tobago, as he takes full aim at exposing soca to the masses and capturing his spot in the limelight, in the North American market.

“I am extremely grateful for all the support you have shown me over the years and I thank you very much for coming out to support me and my album tonight,” Farmer Nappy told the S.O.B.’s crowd. He was backed by a stellar session band that includes some of the top producers in soca music, including Scott Galt of De Red Boyz on guitar, Shawn “Mr. Roots” Mitchell of WIZ Records on bass, Darien Bailey of Studio B on keyboard and Melvin Alick on drums.

The live-band performance brought down the house as fans followed Farmer word-for-word through his hit-filled catalog, which spans 30 years and counting. He ran through the gamut of tunes, from his breakout hit “Chippin’,” to crowd favorites such as “Surrender,” “You Make Me,” “Minglin’,” “Stranger,” “Flirt,” to classics like “Music Farm” from his Xtatik days, then concluded the hour-long set with his current blockbuster “Big People Party,” which placed second in Road March and third in the International Groovy Soca Monarch at this year’s Trinidad Carnival. Farmer was also joined on-stage by dancehall icon Lady G, for an impromptu rendition of their collaboration “Surrender Remix,” much to the crowd’s delight. 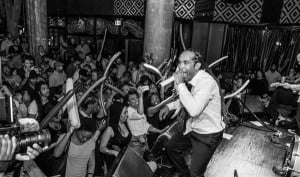 A concept event for soca music, this album launch was completely free as it provided the opportunity for Farmer Nappy to give back to his longtime fans, and to also expose and market his music to the mainstream audience. It was hosted by Toronto-based radio personality and soca aficionado Dr. Jay, while music was provided by the international alliance of soca deejays known as Team Soca, with deejay sets from Freeze International, D Soca Boyz, Spoil Brattz and anchored by DJ Spice of NYC’s Power105.1 FM. The showcase concluded with an album signing session and meet and greet with fans.