Madelin Meran, 25 years old, was stung on the hand by a lionfish in Boca Chica. She was taken to the Dr. Dario Contreras Hospital, treated and released.

The invasive species has long spines that inject painful venom. But the venom is not lethal to humans. 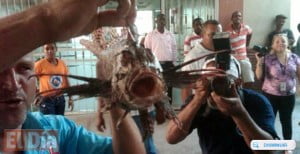 The fish is a threat to Caribbean reef ecosystems and marine scientists recommend that fishermen focus on capturing lionfish to reduce populations.

While the spines of lionfish can give a nasty sting, once they are removed they pose no danger. Lionfish is tasty and can be prepared and enjoyed in many different ways.

There several programs across the Dominican Republic that are encouraging the capture and consumption of lionfish.