7,200 in six weeks, this is what 63 year old Rudolph Shepherd has been able to win from his participation in the re-introduced Digicel Fugitive game.

From the very first week when the highly popular “bounty hunter” themed game started, Rudolph had been a winner, nabbing the fugitive on Saturday, February 15 for $400 in cash. In the week’s following, the avid participant has caught the Digicel Fugitive on three other occasions, netting himself $2,800; $800 and $3,200 respectively.

Mr. Shepherd credits his success to the use of his mobile device, stating that not only had he signed up to receive the clues in advance, but that he has also been making full use of Digicel’s 4G data network: 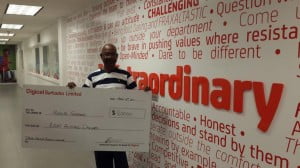 4-time winner, Rudolph Shepherd, collected one of his winning cheques.

“The first thing I did was sign up for the clues that Digicel sends to you 15 minutes before they are read on Starcom radio, because I wanted to make sure I had a head start on the competition. Once I get the clues I go straight to Google on my phone to help me figure them out, which is something I couldn’t do in the previous years. So I’m glad that Digicel now has such a fast network, because it helps me to win.”

“Catching the fugitive on four occasions is no easy feat, but it is clear that Rudolph has devised the winning formula by taking full advantage of the advanced text clues, as well as our reliable 4G network. With only a week left before the end of the game on the 29th, I would encourage all participants to sign up for the advanced clues and use our data network while on hunt to help them figure out the correct answer.”

Persons interested in getting the clues on their device before they are announced on air can register their device by texting the word “HUNT” to the number 2583. Once completed the clues will be sent to their phone each day, 15 minutes before the clue is revealed at 8am, 12noon and 4pm respectively.

Additionally, persons can also text where they think the Digicel Fugitive is hiding to the number 4868 for a chance to win $100 per clue.