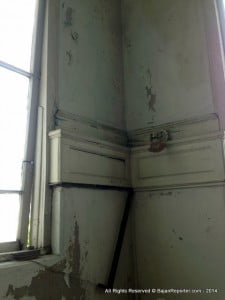 The deteriorating walls along the stairwell in Hayes Court. Photo courtesy the Hayes Court Restoration Committee.

Hayes Court is one of the Magnificent Seven buildings, which were listed by the Organisation of American States as a historic district on the Register of Monuments of the Greater Caribbean. Standing along the western edge of the Queen’s Park Savannah, Hayes Court is a bastion of cultural heritage and religious history. Originally conceived and traditionally used as the residence of the Anglican bishops of Trinidad and Tobago since 1910, the structure was named after Bishop Thomas Hayes, the second bishop of Trinidad and Tobago. Boasting high ceilings, a mahogany staircase, wrought-iron fretwork and wood panelling, Hayes Court was described by historian Olga Mavrogordato as, “a typical grand house with a pleasant mixture of French and English style.” The majestic twentieth century house has received guests including South African Archbishop and Nobel Peace Prize winner, Desmond Tutu, as well as the Archbishop of Canterbury and heads of the Anglican Church, Robert Runcie and Donald Coggan.

View of the present-day Hayes Court, a shadow of its former splendour. Photo courtesy the Hayes Court Restoration Committee.

Today the building stands in disrepair, a shadow of its former glory. The termite-ridden structure, with cracking and peeling paint, damage due to a leaking roof and crumbling concrete walls, is in urgent need of renovation. As a result, Bishop Berkley as well as his predecessor, Bishop Calvin Bess, have been unable to occupy the residence. 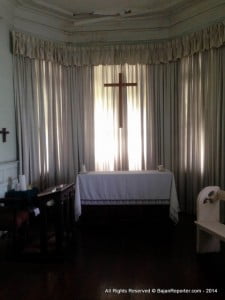 The current Anglican administration is driven to raise the TT $24.1 Mil. needed to successfully execute the Hayes Court Restoration Project. Reflecting on the relevance of this initiative to the land he calls home, Bishop Berkley shared, “it is our vision to restore Hayes Court to its former splendour as a centre of Anglican excellence while preserving a heritage site that we feel can serve to inspire pride and appreciation for our rich cultural legacy.” In addition to planning for the restoration; and reinstalling the current and future Anglican bishops into the residence, the Anglican Church is developing strategic plans to diversify the functionality of the space to include heritage activities such as tours and the establishment of a mini-museum.

The work of termites that are slowly taking over Hayes Court. Photo courtesy the Hayes Court Restoration Committee.