Despite the hoopla over the approval of the Volcker rule, which restricts banks from making certain types of speculative investments, our financial system isn’t much safer than it was before 2008. A major reason for the continued complexity and risk in the financial system is lobbying power. 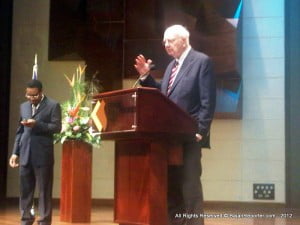 {PERSONAL FILE IMAGE} The Volcker (Paul at Lectern) rule as it stands now has been turned into Swiss cheese by bank lobbyists, who represent the second biggest corporate special-interest bloc after the health care complex, spending nearly half a billion dollars a year on lobbying, according to the nonprofit, nonpartisan Center for Responsive Politics.

So while the rule limits federally insured banks from trading for its own sake, they are still allowed to hedge their portfolios, which opens up a lot of gray territory for trading. Certainly having more lenders rather than fewer would help other kinds of businesses, and having trading walled off from lending would encourage that.

The fact that the five largest U.S. financial holding companies control 55% of industry assets – compared with 20% in 1990 – keeps competition low and credit constrained. In the next two to five years, there will likely be another crisis or trading loss of the kind that reignites the debate over closing trading loopholes and creating a truly safer financial system.

Right now, banks complain about rules that would require them to hold a mere 5% of their assets in high-quality, low-risk capital (known as Tier 1 capital), despite the fact that in any other industry, doing business with less than 50% of your own cash would be considered extreme.